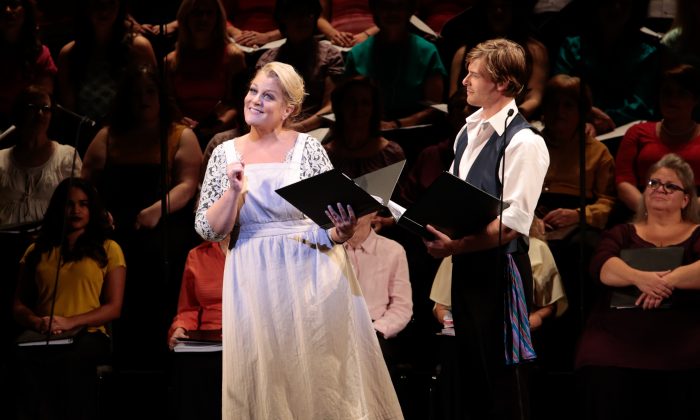 ‘Pirates of Penzance’ With Stars Aplenty

NEW YORK—MasterVoices (formerly The Collegiate Chorale) began its season at City Center with Gilbert & Sullivan’s “Pirates of Penzance; or, the Slave of Duty.” The star-studded semi-staged production may have lacked the polish of the NY Gilbert & Sullivan Players, but it had some sublime performances.

Under the baton of Ted Sperling, the Orchestra of St. Luke’s started the evening with the effervescent overture, sprinkled with the familiar melodies (including “Hail, Hail, the Gang’s All Here”). The chorus was seated in the back of the stage, and the actors were in costume, but all had the texts in hand. Nevertheless, there was witty choreography supplied by Gustavo Zajac, who also serves as associate director.

Among the joys of the evening was the performance by opera star Deborah Voigt. Who knew that this world-famous Wagnerian soprano would make such a charming Ruth? Of course, her singing was beautiful.

To briefly recap the plot, Frederic is a young man who was apprenticed to a pirate because his nursery maid Ruth mistook the word pilot for pirate. When the action begins, Frederic believes his obligation to the gang is about to end because he is approaching his 21st birthday.

Ruth wants to marry him, but he has led such a sheltered existence that he has never seen another woman. Therefore, he accepts her statement that she is considered attractive and agrees to overlook their age difference.

Suddenly, a group of young ladies appears, and Frederic instantly changes his mind.  He reveals his status as a pirate on the verge of changing careers and makes a proposal of marriage. Mabel (the youngest of the group) agrees. Then, the pirates arrive and each claims one of the girls. However, their father Major-General Stanley enters and registers his objection.

The reason that the pirates have been unsuccessful is that they are all orphans and, consequently, they decline to rob another orphan. Word spread, and consequently all their potential victims claim to be orphans as well. Stanley uses the same trick so that he, Frederic, and the girls can escape.

Frederic decides that once he is released from his obligation to the pirate gang, he will become a law-abiding citizen and set the police on his former comrades. His plans are thwarted by the Pirate King, who tells Frederic that because he was born on Feb. 29 of a leap year, he is only 5 years old and will not reach his 21st birthday until 1940.

The police and pirates clash. Ruth announces that the criminals are in fact noblemen and are ultimately forgiven so that the couples, including Mabel and Frederic, can proceed with marriage.

Douglas Hodge is a delight as the Major-General. He delivers one of the fastest patter songs ever written with unbelievably clear articulation and even wins laughs when he has no dialogue. As the Pirate King, Phillip Boykin mugs quite a bit but he is a vocal powerhouse. It’s hard to believe that this lovable actor was the fierce Crown in the Broadway revival of “Porgy and Bess.”

Julia Udine is completely winning as Mabel, enchanting as both a singer and comedienne. Her rendition of the takeoff on the Mad Scene in “Lucia di Lammermoor” was one of the highlights and showed that Voigt was not the only one in the cast with operatic training. As Edith and Kate, two of Mabel’s sisters, Betsy Wolfe and Montego Glover were also charming but underutilized.

The main disappointment was the Frederic of Hunter Parrish. An amiable warbler in shows such as “Godspell,” he lacks the voice required for Gilbert & Sullivan. Also, the fact that he had to depend so much on reading the text (understandable since he had the most lines) was distracting. He was completely drowned out by Voigt when he sang with her. Boykin, on the other hand, with his sturdy bass-baritone, held his own with the diva.

The chorus was a pleasure, as always.