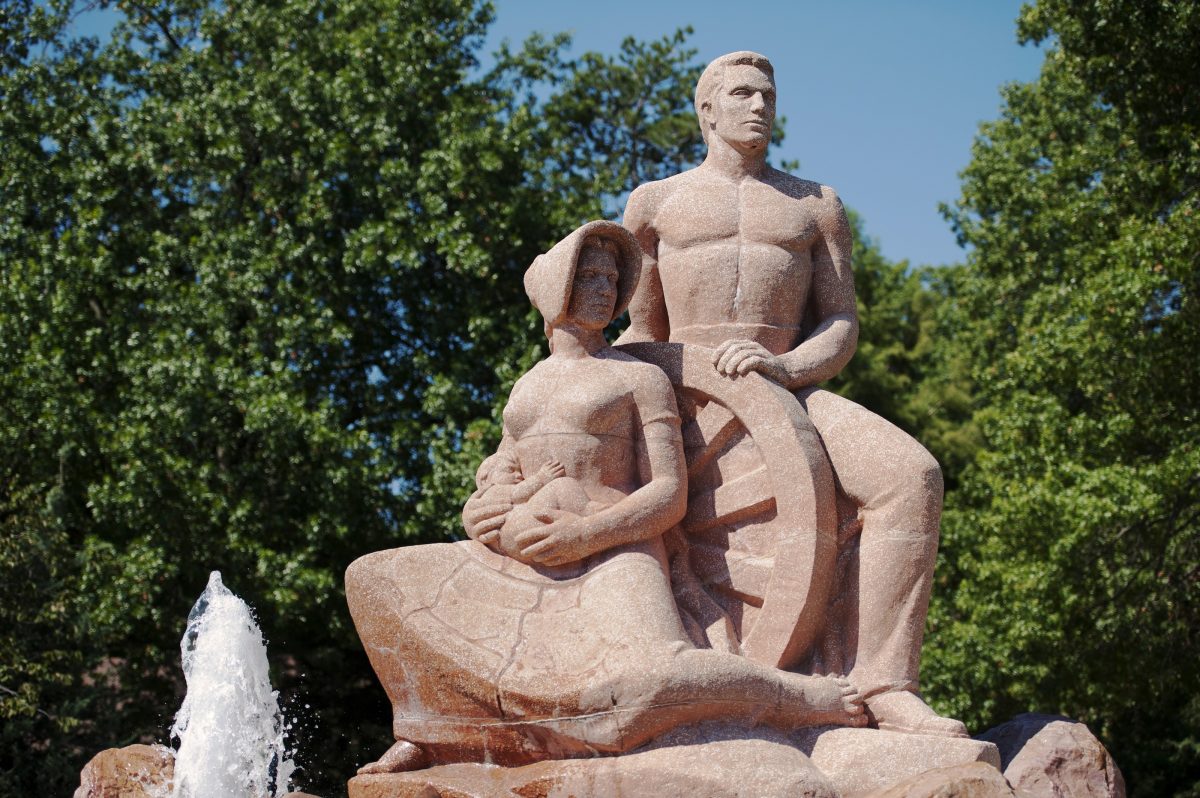 Annabella Campbell is the artist of Prairie Village Gateway, a fountain centerpiece made of concrete and stone. It is located at Tomahawk and Mission Streets in Prairie Village, Kan. Photo taken on Sept. 9, 2013. (Cat Rooney/Epoch Times)
Arts & Culture

For 200 years, settlers from the eastern United States ventured westward to find new opportunities and a better way of living. The daring travelers became known as pioneers, making friends or enemies with the native inhabitants.

After World War II, 1920s Kansas City land developer J. C. Nichols bought land from the original pioneer families that settled the area, according to the city. He built modest homes for returning solders to be purchased with G.I. loans. The city of Prairie Village later formed in 1953.

Nichol Company bought this statue of the pioneer family and placed it across from a newly developed shopping center. It was later donated to the city, which relocated it, adding a fountain, to a nearby crossroads in 2002.

The four horsemen in this fountain are believed to be symbolic of four mighty rivers—Rhine, Seine, Volga, Mississippi—and the native peoples of the rivers. This fountain was dedicated to J. C. Nichols, the developer. The fountain was made in Paris in 1910 and was later found in a U.S. salvage yard in 1951. It was originally displayed on the grounds of the Mackay Estate in Roslyn, N.Y., according to the City Fountain Foundation.

According to local historians, the City of Eudora was named as part of a purchase agreement. In 1856, Shawnee tribal leader Paschal Fish sold his land to the German Immigrant Settlement Company from Chicago with the prevision that the new city be named after the his daughter, Eudora. Fish owned the local hotel and ferry.

This bronze statute was unveiled for the city’s 150th anniversary celebration. Among the attendees at the unveiling were decedents of the Fish family.

Buffaloes were an important part of the prairie natives’ culture. Made of 4 tons of limestone, this buffalo has stood since 1988 in a small patch, nestled among native prairie grasses, in front of a popular exercise trail. Local neighbors place ribbons or wreaths around its neck during seasonal occurrences, according to Bridge Haven, an assisted living center.

The famous Overland Stagecoach Line traveled the Overland Trail to deliver mail and passengers in the 1860s, according to Wells Fargo, who financed stagecoach companies.

This sculpture of a wagon trail depicts the crossing of four pioneer trails—California Road, Fort Leavenworth Military Road, Santa Fe Trail, Oregon Trail—though Shawnee, Kan. This historic crossroads resulted in 600 wagons rolling through the city each day, according to the Shawnee Convention and Visitors Center.

Pioneer Crossing Park, where the sculpture is located, was dedicated during the celebration of the City of Shawnee’s 150th anniversary in 2006.