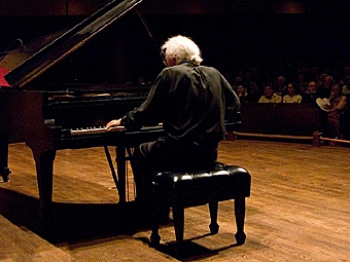 Piano and Strings at the Ottawa Chamberfest

André Laplante and the Shanghai Quartet

He opened with two Chopin pieces, “Nocturne in F major, opus 15, no. 1,” which he played best during the parts that required a light touch, and “Fantasie in F major, opus 15 no. 1” the start of which he executed with a contemplative hand and a delicate touch. During the fortissimi Laplante used tremendous energy and could be seen slightly rising off the bench as he struck the keys.

Sometimes hunching over the keyboard à la Glen Gould, Laplante could be heard humming or making other vocalizations during the three pieces from Liszt’s “Années de pélerinage, première année.” The crowd loved his interpretations of soothing music mixed with rounds of excitement. His final, Valee d’Obermann, had the audience on their feet and Laplante breathless from his vigorous playing.

After the intermission, Laplante was joined by the Shanghai Quartet, a particular favourite of the Ottawa audience. Spending 180 days a year on the road means that the quartet is like a family or a marriage. “We are a single entity when playing and when it is time for you to shine, you can’t hesitate,” says violinist Yiwen Jiang. “You need to let the others shine as well. There is harmony. That’s the concept of a whole body.”

With cellist Nicholas Tzavaras sporting an almost-healed black eye from a cycling accident, four movements of the cyclic Schumann’s “Quintet in E-flat major, opus 44” were executed brilliantly by the five players. The faster section of the second movement was played at a dramatic tempo and with considerable skill. At the end, the last movement's main theme was combined with the first movement's main theme in a double repetition that was captivating to hear—a testament to their professionalism given that the quartet and pianist had only met the evening before.

“We have rendered this piece many times, and so has Andre,” says violinist Weigang Li. “That’s why when we play together we are quite harmonious, and the result is good.”