Pianist Wonders If She Can Help Shen Yun’s Mission 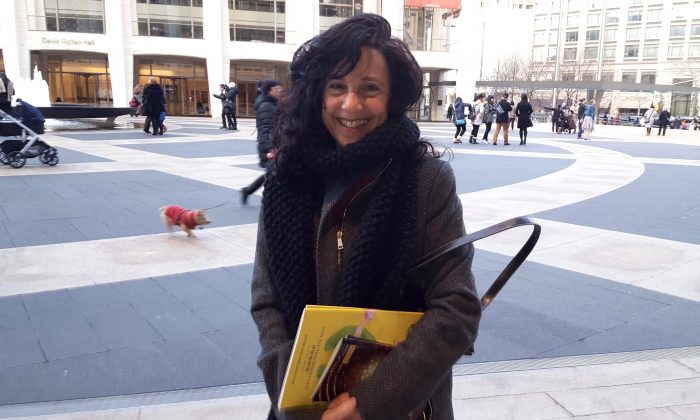 NEW YORK—Intrigued, mesmerized, and inspired to help a worthy cause, classical pianist Peggy Reich was at a loss to account for the inner feelings that came out of Shen Yun Performing Arts’s dancers and musicians.

The Argentinian pianist usually explores classical Spanish music and so encountering Chinese instruments and vocalists presented her with a whole new continent of ideas to explore. Able to analyze as she listened to the integrated orchestra of classical Western and traditional Chinese instruments, she asked herself questions, like why are certain tonal intervals prevalent in Chinese music? Is it for spiritual or cultural reasons? Why did they choose certain harmonies versus others?

“Why do they, at the end of phrases, end on a higher note rather than rounding out phrases like you usually hear in Western music?” she wondered.

Shen Yun’s all-original compositions draw upon 5,000 years of Chinese culture—a musical heritage that has always emphasized “the expression of inner feeling.” The ancient Chinese always used music to relate their states of mind, according to the company’s website, whereas Western music looked at the overall effect of the orchestra —by focusing on arrangement and harmony. “Shen Yun’s music combines these approaches to capture the essence of both East and West.”

That inner emotion of the Chinese sound mesmerized Ms. Reich, who saw Shen Yun at Lincoln Center on March 5. She noted it particularly when the two-stringed erhu was played: “That was so moving. I thought that was really incredible.”

Erhu virtuoso, Xiaochun Qi, has been with Shen Yun since 2006 and has often brought audience members to tears. The alto instrument can sound deeply stirring and poignant.

“She can create with just those two strings the inner—I’m at a loss for words. I guess the inner feelings that came out were just amazing, both melodically and dynamically.

“Their line of music just was so … mesmerizing. I felt it was gorgeous,” Ms. Reich said.

It wasn’t just the dynamics of the erhu, Ms. Reich noted, but also its textures, through the slurring, and what in Western music calls staccato or pizzicato.  “I just felt so drawn into what she was playing,” she said.

Just as much as she was mesmerized, Ms. Reich was also inspired to help Shen Yun in its mission. In restoring traditional Chinese culture to the world, Shen Yun, through some of its dances, carries a message about a terrible injustice going on in China today: the persecution of Falun Dafa.

Although Ms. Reich knows little about the spiritual practice centered on the ideals of truthfulness, compassion, and forbearance, she would like to help get the word out about the persecution. Simply by experiencing Shen Yun’s very positive music, she feels that it is “a wonderful practice full of goodness.”

She wonders if instead of using Chinese instruments, the piano might serve as a means to introduce the message to people in a more Western way. Perhaps she could transcribe music, and incorporate the idea that people have no freedom and are being persecuted for beliefs.

But in the meantime, given her excellent memory, she would now like to settle down with the program, read about each piece, and think about the beautiful colors used onstage as they related to the music. She would like to think deeply about all the new questions Shen Yun’s music has given rise to.

“I’m just in awe. I’m in awe of everything. It was overwhelming,” she said.