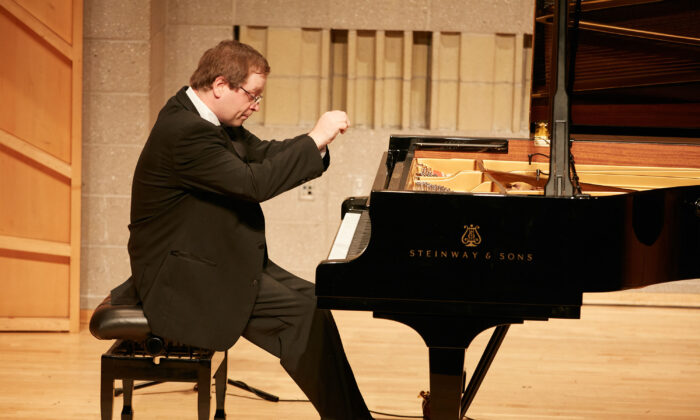 Music is entertainment, but it can also be a powerful communicator of grand ideas and things we can’t, for whatever reason, put into words, says pianist Maxim Anikushin.

Music “can bring a message to people that otherwise would not be okay to say in words sometimes—this is what I feel. It has the power to communicate,” Anikushin said. “It can be a powerful force for the human mind.”

“Beethoven’s a genius, and he communicated grand ideas: fraternity, brotherhood, and triumph over tragedy,” Anikushin said.

Many of Beethoven’s work draws on nature, and many were composed during his walks amid nature even as he lost his ability to hear.

“He also unites nature with a human character; so there is a unification of storm and drama, peaceful conditions of the mind, and the stillness of the forest,” Anikushin said.

The polonaise tells a very different kind of story, but one that also ended on a note of brilliance.

“It’s a joyous dance. It is a bit of a military dance, and when I play, I imagine a ballerina, a prima ballerina, dancing this, and all of the supporting people, the men who are about to go to war are supporting her in this polonaise,” Anikushin said.

The NTD International Piano Competition is unusual in its choice of repertoire, requiring Bach etudes from contestants in the preliminary round.

For Anikushin, “it was perfect.”

“I believe Bach is the greatest genius composer there is in the world. What he created, it feels like God speaks through him,” he added.

Anikushin, from Moscow, said he actually played much more Bach than Russian music when he studied in Russia. He later emigrated to the United States and studied at Juilliard before getting his doctorate in piano performance from the Manhattan School of Music. He performs eight or nine times a year around New York City, and credits his teachers for instilling in him their wisdom.

“Anyone can practice, but you need to know how to practice,” he said.

Anikushin dazzled listeners with his artistry and technique, and impressed judges with his mastery of tone.

Bach is foundational to piano music, and Anikushin thought it was a clever choice to include it in the preliminaries.

Also unique was the commissioned piece, which Anikushin said was the longest commissioned work he’s played thus far. He’s no stranger to Chinese music, having performed another work by a Chinese composer in a previous competition.

“Asian music has a lot of coloristic possibilities that I haven’t experienced before,” Anikushin said. The work was commissioned from Shen Yun Performing Arts artistic director D.F., and arranged for piano by judge Susan Liu using classical techniques.

“I love it and I want to play it more,” Anikushin said.