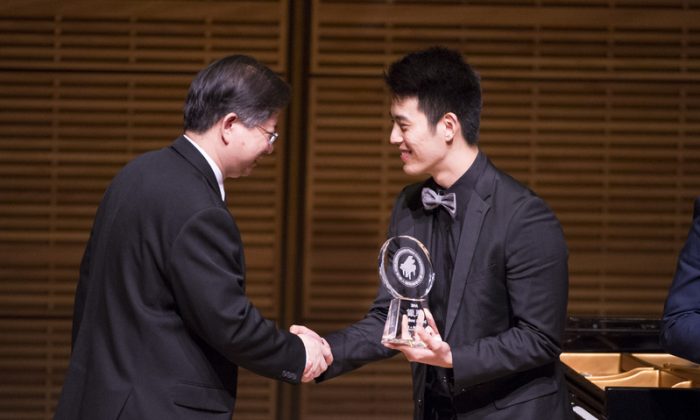 Joseph Choi took home the silver prize of $3,000. He holds a master’s degree from Juilliard and he spoke to the Epoch Times about his approach to playing the piano, his admiration for the golden age of playing piano, and future aspirations.

Joseph Choi: I started playing the piano at the age of 6, and I have always loved it. I think it’s partially because my father’s family’s side are all musicians. My dad sings and conducts as well. Music always seemed like the natural choice for me. It seems that music chose me, instead of the other way around. I was blessed.

The music that I play now is like a living entity.
— Joseph Choi, pianist

I was born and raised in Hawaii and was very fortunate to have a private teacher by the name of Ellen Masaki until I was 13, and she has always been there for me. When I moved to Austin, Texas, I started studying with Anton Nel, the head piano professor at the University of Texas. Then, I was very fortunate to be accepted at The Juilliard School. There, I did my master’s with Jerome Lowenthal and Matti Raekallio, who are both still teaching there. For the past four years they’ve been a really strong influence on how I’ve started viewing music. Anton Nel laid the foundations for me, he told me how to recognize the stylistic differences and how to read the music that’s not quite on the page, but I feel that Lowenthal and Raekallio helped to bring all that together and bring the music to life. So the music that I play now is like a living entity. I’ve had very good mentors and teachers.

Epoch Times: At what stage did you start entering competitions? What is your advice for pianists about to enter into competitions?

Mr. Choi: I did not do many competitions when I was young. I did maybe one a year in my local area, but the NTD TV International Piano Competition was the first international piano competition that I entered.

Mr. Choi: I think that competitions can be very stressful and very daunting, but a competition is just another performance opportunity—a short-term goal to prepare for. It’s also an opportunity to hear from other pianists of really high level and to learn from other pianists. A lot of times I see these competitions as mini festivals because you get to meet all these people and hear what they think about music. It’s always an eye-opening experience.

Josef Hofmann said [that] sincerity is the most important thing for creating music. So that has always been my motto—not to do things for show … but to actually feel the music.
— Joseph Choi, pianist

Epoch Times: How do you prepare mentally for a competition?

Mr. Choi: Because I treat a competition as another performance opportunity, I think that the most important thing in performing music is sincerity—as the really fantastic pianist of the 20th century, Josef Hofmann said, “sincerity, sincerity, sincerity” is the most important thing for creating music. So that has always been my motto—not to do things for show, to show [my] technique or musicality, but to actually feel the music.

I like to go back to the golden age of playing piano, the 20th century, to [Josef] Hofmann, the old Russians such as [Emil] Gilels, [Sviatoslav] Richter, [Vladimir] Sofronitsky, and my teacher himself, Lowenthal, who studied with [Alfred] Cortot, and so I’m very influenced by that.

Mr. Choi: I’d have to say Beethoven. To me, Beethoven is God. What he has done in his lifetime, people only dream of doing. As of late, I’ve also been really attracted to Schumann, I feel like his music is so deep and so romantic—I guess I’ve been drawn to this romantic style of playing for the past several years. Schumann is very close to me.

Mr. Choi: I recently watched this TED talk by Benjamin Zander (conductor for the Boston Philharmonic) and he was talking about the transformative power of classical music, and I was so happy because he was putting in words what I was feeling all of these years. And so I would encourage people who are not very interested in classical music, or who want to know more about classical music, to see that video.

Music will always be a part of my life. I still contemplate whether or not I want to make a career out of it in terms of playing concerts for a living, but I do love performing and I love teaching. My highest achievement would be to play classical music to a wide-ranging audience and to have them understand where I’m coming from and what I’m doing.

The 4th NTD International Piano Competition will be taking place Sept. 30 to Oct. 2, 2016. The competition will consist of one qualification round and three separate live competition rounds: Preliminary, Semifinal, and Final. Contestants from all around the world are welcome to apply. Applications will be accepted this fall.