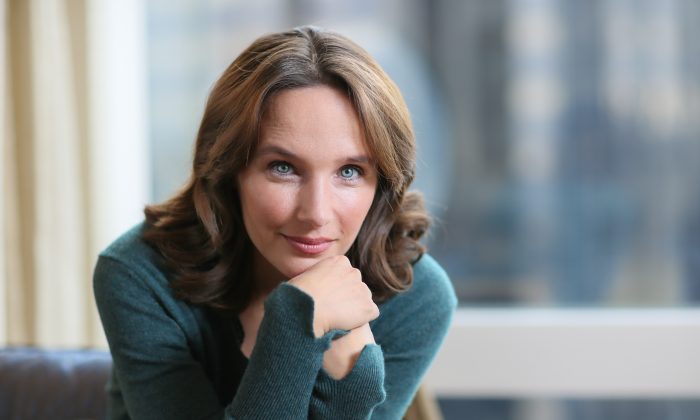 NEW YORK—Hélène Grimaud can look straight into your eyes with an intensity that is arresting. Her gaze has a certain wildness and unwavering quality that matches the passion with which she plays the piano.

Nature is her ultimate muse. “I always felt a strong sense of the sacred being in wild spaces,” she said at the Mandarin Oriental hotel on Feb. 9, during her publicity run of interviews and photo shoots with various media.

A highly celebrated pianist in the world today, Grimaud is also a dedicated wildlife conservationist, a writer, and a human rights activist. Born in Aix-en-Provence, France, she feels more at home in the United States. After living in Switzerland for some years, she just recently returned to live in upstate New York near the Wolf Conservation Center that she founded in 1999. “I knew I was going to come back, so it was only a matter of when, not if,” she said.

The environmental education organization takes care of four ambassador wolves—wolves raised from puppies by humans, never to be released into the wild, to help educate the public about their endangered counterparts. The Wolf Conservation Center also participates in the Species Survival Plan (SSP) for the Mexican gray wolf and the red wolf.

Hiking through woods, up mountains, or being anywhere in nature is the best place for Grimaud to slow down, be quiet, and start listening. “You have no choice then but to fill that space. That’s when things start to develop, and the imagination starts to blossom,” she said.

In line with her affinity with the German romantic movement’s precept of the artist penetrating the depths of creativity through a communion with nature, Grimaud bridges two worlds like an ambassador wolf. “When you are on stage there is that wonderful aspect of being like a medium, in the literal sense of the word, where you are this open channel that connects the world of the audience to the world of the composer. … It’s a great responsibility but it is also something very liberating,” she said.

Grimaud feels freest when she is performing in a great space with optimal conditions. “There is nothing like that to help you take off and just fly to another dimension,” she said. But she hardly ever feels at ease wearing dresses during performances or at any other time. “I’m always happier to just go on stage wearing a slight variation of a pajama kind of outfit,” she said, laughing.

Sometimes when she plays the piano or listens to music, she experiences the sounds in color. Her synesthesia is consistent. For her, D minor is always dark blue, C minor is always black, G is green, F is red, and B flat is yellow. “The color changes with every modulation in the piece, but the dominant color is the one of the tonality in which the piece is written,” she said. It doesn’t happen every time she plays or listens to music, and it doesn’t necessarily help her memorize the music, “but it’s nevertheless a beautiful thing to be experiencing,” she said.

Grimaud is known for her courage in keeping to her artistic vision. The way she determines if a certain rendition or choice of repertoire is true is fluid. “Each performance is always different, and it should be because otherwise it would be the beginning of the end,” she said. If she performs exceptionally well at a concert, it’s difficult resisting the wish to reproduce that experience the same way the next night. But “that runs counter to the various principles of invention and interpretation,” she said. So she makes an abstraction out of what transpired and starts anew every time, being true to spontaneity and “going with the flow,” she said.

Acknowledging the fleeting nature of performing, Grimaud realized a long time ago that she wanted to make a difference in other ways as well. “You can’t just hope that if you have at least touched a few people in a performance that’s enough. There’s still the little acts of every day, which collectively make a huge difference, probably more of a difference [in the long run],” she said.

We are water. The majority of our bodies, like the surface of our planet, is constituted of water. Life cannot exist without it.
— Hélène Grimaud

Music and wildlife conservation may not seem to have much in common on the surface, but Grimaud said it helps her put things in perspective as to what truly matters.

Being with wolves she learned respect. “You learn to meet another being on their terms, which is a great lesson of humility, based on listening and paying attention and being mindful. It’s about living in the moment and that interaction where you have to be 100 percent present physically, intellectually, emotionally, spiritually,” she said.

But that is not what she finds most interesting about this endangered predator. The wolves remind us of a broader issue that affects everyone on the planet. “You have to save habitat. You can’t seriously talk about preserving that species without talking about their home. It’s about the health of the ecosystem in general, so it’s more than just about one species.” With that line of thought, she created what she likes to call a musical ecosystem.

With the intensity of her gaze, Grimaud has focused on the most pressing ecological and humanitarian crisis of our time. “We are water. The majority of our bodies, like the surface of our planet, is constituted of water. Life cannot exist without it,” she wrote in her liner notes for her latest Deutsche Grammophon album, “Water.”

It combines nine piano pieces of 19th and 20th century composers, including Berio, Ravel, Liszt, and Debussy, and reunites two incarnations of a two-year project in collaboration with the Turner Prize-winning artist Douglas Gordon and the composer and producer, Nitin Sawhney.

In December 2014 Grimaud’s performance at the Park Avenue Armory in Gordon’s site-specific installation, “tears become … streams become …” was recorded live with just a couple of small microphones—initially only for archival purposes.

Water was pumped silently to a specially engineered floor in the Wade Thompson Drill Hall. For about 20 minutes the audience watched puddles seep up into the floor, getting larger, and eventually uniting like magnets to form a 4-inch-deep black lake. Grimaud then walked to the piano on a platform, to an island in the middle of the huge mirage that reflected the buttressed ceiling of the vast hall. By that point the public had enough time to quiet their minds and to be more receptive to the music.

“There was this otherworldly quality to the installation … quite magical and hypnotic. It was the perfect écrin, as we say in French, this jewel box for what was about to happen musically,” she said.

Although the recording was an afterthought, she eventually decided the sound captured in the Armory was best for the album. “The sound reflecting off of that water surface was something that you can’t hear anywhere else,” she said. She was delighted to let that ephemeral collaboration with Gordon live longer through the album.

To complete “Water” she invited the boundary-crossing composer Nitin Sawhney to produce it and create the transitions between each of the nine piano pieces. Sawhney seamlessly stitched the repertoire, which is so fragile, vulnerable, and poetic.

Grimaud said it’s an album designed to be listened to, preferably, from beginning to end. “There is nothing interchangeable about those transitions. Basically, it takes you from the last note of the Berio and leads you into the first note of the Takemitsu and so on,” Grimaud said. It is quite a feat to stitch that repertoire—all inspired by water—together, as “Water” travels far and wide in terms of moods yet remains intense throughout.

Listening to “Water” or to Grimaud performing on stage can bring you to the present moment. “The best way to achieve mindfulness is to pay attention to the person that’s in front of you, to really look into their eyes so that you really connect to the fullest. Otherwise, it’s to develop as much empathy and compassion. I think that’s what life’s journey is about. It’s easier said than done, but hopefully this is a state that you reach as you mature,” she said.

Hélène Grimaud will perform Brahms Piano Concertos with the Detroit Symphony Orchestra, Feb. 25–28 and with the Philadelphia Orchestra, March 3–5.

“This Is New York” is a feature series that delves into the lives of inspiring individuals in New York. See all our TINYs here: epochtim.es/TINY or follow @milenefernandez on Twitter.