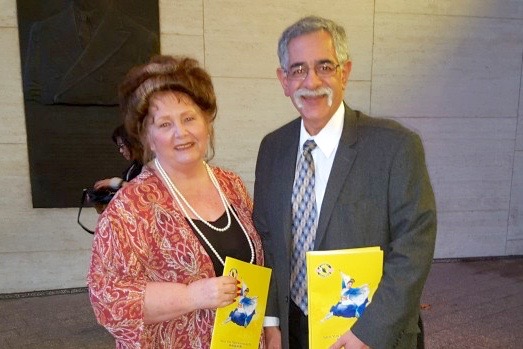 HOUSTON—”I’ve never seen anything like it. You felt like you were special to be allowed to come see something like this. It was quite wonderful,” said Barbara Renteria after seeing Shen Yun Performing Arts at the Jones Hall for the Performing Arts on Dec. 27.

Mrs. Renteria co-owns a private investigation firm with her husband Martin, who was a former police captain in the Port of Los Angeles. The two felt a sense of reverence seeing the performance.

Indeed it is New York-based Shen Yun’s mission to revive 5,000 years of traditional Chinese culture. The company was formed in 2006 by artists who wanted to share the true, divinely inspired culture of China with the world, according to Shen Yun’s website, through music and dance.

When the curtain rises, the scene opens in heaven, with the legend of the Creator calling on divine beings to fulfill their vows, coming to earth and setting into motion China’s beginnings.

It’s just a feeling that you thought that was there.
— Barbara Renteria

“You felt that the dancers themselves were trying to do their best in bringing that reverence out, to honor the old dynasties,” Mr. Renteria said. “So you felt that reverence. It’s just a feeling that you thought that was there.”

The couple thought the Shen Yun performers were extremely expressive. The art forms themselves were unique—classical Chinese dance has been passed down and refined through the dynasties, and the symphony includes traditional Chinese instruments—lending to the performance’s expressive power.

Mrs. Renteria said all the aspects were outstanding and touching to the point where she cried during one story. “They expressed feeling and emotion so well in the performance [that] it was outstanding.”

It’s something you need to see twice.
— Barbara Renteria

“It’s something you need to see twice. You just need to absorb it, it’s beautiful,” Mrs. Renteria said.

“We look forward to the next performance whenever they come again to Houston,” Mr. Renteria said.