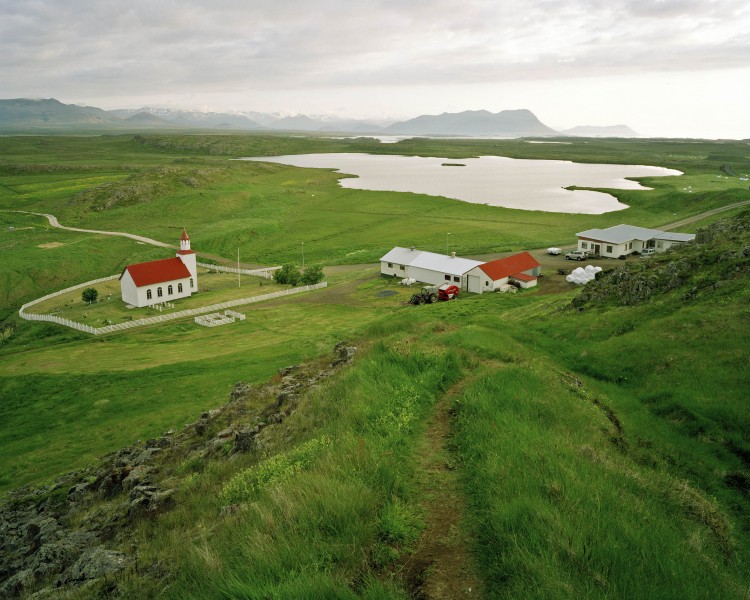 NEW YORK—The English-speaking world has the tales of King Arthur. The Arab world has “One Thousand and One Nights.” The Scandinavian people of Iceland have the “Íslendingasögur,” or “The Sagas of Icelanders”—which are arguably more embedded in the landscape of its people than other ancient tales.

While the English might speculate about the location of Camelot, Icelanders know the exact locations of the sagas, even down to the farms featured in the stories.

A new exhibit of paintings and photographs at Scandinavia House, in Midtown Manhattan, tiptoes across the centuries to make the sagas vividly come to life.

Set as early as the 9th century A.D. and anonymously recorded in the 13th and 14th centuries, the sagas tell stories ranging from the mundane to the mystical.

“They can be quite brutal at times,” Ingólfsson said. “They’re the first Scandinavian crime novels.” Amid the battles of warrior, outlaws, and chieftains, there also moving stories of wives and retribution, as well as references to a legal system that existed despite a central government.

“The sagas are really truly our cultural treasure,” Ingólfsson said.

Fast-forward to 1897, when British artist William Gershom Collingwood, enchanted by the sagas, made a 10-week trip to many of the specific sites mentioned in the sagas. Collingwood made around 300 watercolor paintings depicting the sites. A few decades later, they would also influence the works of “Lord of the Rings” creator J.R.R. Tolkien.

Fast-forward again to 2010. Ingólfsson set out to find the exact locations and perspectives from which Collingwood painted to recapture in the present. On their first trip to North America, his photographs are juxtaposed with Collingwood’s paintings, creating an epic and fascinating visual narrative.

Ingólfsson refers to himself as Collingwood’s twin. Both were 44 when they visited the saga sites. Collingwood often painted portraits of locals. Ingólfsson photographed locals in the same farms. In one case, he even photographed the great granddaughter of the little girl that Collingwood painted over 110 years ago.

Running now through January, the exhibit features around 30 of Collingwood’s original paintings along with 30 of Ingólfsson’s photographs. Text on the walls recounts the history of the sagas as well as plotlines of some of the sagas themselves. The recounted sagas match the settings in the photographs where they took place.

Viewers can easily appreciate the accuracy of Collingwood’s paintings. The same dramatic contours in the land, water, and mountains that he painted in 1897 endure through to present in Ingólfsson’s precisely executed photos and can easily be imagined existing a thousand years ago when the sagas took place.

A touch of storytelling is added.

“He made the mountains higher,” Ingólfsson noted.

At one site, Collingwood’s view was blocked by a rainy day and he could not see the mountains shrouded in clouds. To finish the painting, he added dramatically steep and high mountains towering over the quaint valley below. In reality, the mountains were not nearly that high.

Ironically, it has become one of the most recognizable of Collingwood’s paintings among Icelanders.

“It is in our school textbooks,” Ingólfsson said.

The exhibit opening on Sept. 28, was attended by Icelandic Ambassador Guðmundur Árni Stefánsson, evincing its significance to the island nation.

“This exhibit is linking the past with modern times. It’s very simple when you think about it,” Stefánsson said in a speech at the opening.

A sparsely populated Scandinavian nation, Iceland is about the same size as Kentucky but has only around one-fourteenth of the population. The harsh cold and periods of around-the-clock darkness and sunlight put it on par with Alaska.

“We live in a country where nature and the natural elements are a very big part of our lives, a bigger part than for most people,” Ingólfsson said.

That connection between the land and its people is embodied by the exhibit.

The exhibit is free to the public. A series of events are being held at the exhibition, including readings of the sagas, lectures on the sagas and their historical context, and storytelling for children. Admission fees for the events vary.