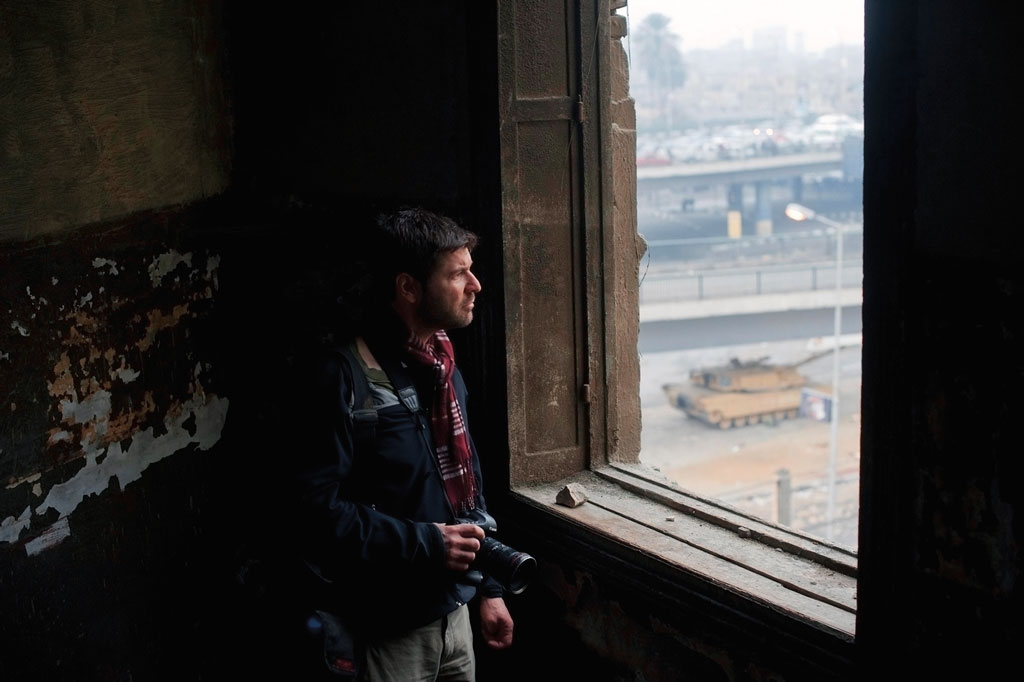 Photojournalism: Life and Death Behind the Lens

Getty releases tribute book to photographer Chris Hondros, 3 years after his death in the field in Libya
BY Genevieve Belmaker TIMEApril 19, 2014 PRINT

NEW YORK—It still doesn’t seem possible to us at Epoch Times that our friends and respected colleagues Chris Hondros and Tim Hetherington are gone. April 20 marks three years since the photographers were killed while working in Misrata, Libya. These were men who filled the room with confidence and filled the world with their unique photographic visions.

They lived at the intersection of where the news collides with those who collect it—sometimes with deadly consequences. It is little comfort to know that Chris and Tim died doing what they loved, and continued to capture images of the terrible war in Libya up to their final moments. But it is a great comfort to know that the world can continue to be inspired by them and what they stood for.

When Getty Images announced it was releasing a book of photographs and writings by Chris, called “Testament,” it seemed a good time to pause and reflect—not just on Chris and Tim’s legacies, but on the bigger picture of how dangerous it continues to be for journalists to work around the world.

It’s important to emphasize the situation for journalists at large, particularly because of how dangerous it is to work in places where some very important news is happening: Pakistan. Iran. Mexico. Afghanistan. Africa. Libya. Crimea. Syria. Russia.

According to the Committee to Protect Journalists, in 2011, the year Chris and Tim died, a total of 47 journalists and five media workers were killed. Another 34 died under suspicious circumstances with still unconfirmed motives. That includes Julio Castillo Narvaez, a radio host in provincial Peru who was shot six times while eating lunch in a restaurant. He was known for being critical of local authorities and had received multiple death threats.

Fast-forward to 2013, when a total of 70 journalists and four media workers were killed, and another 25 were killed with as-yet unconfirmed motives. One of them was Abdul-Nasser Sami, an Iraqi video editor working in Tikrit, Iraq, at a local TV station. He was one of five staffers gunned down by armed militants who stormed the channel’s headquarters.

The stories of journalists who died gathering news are too many and too gruesome to describe in one short newspaper article. But it is possible to shed at least a sliver of light on the grave difficulties inherent in doing something like taking photographs in a place where civil war is raging.

The act of making such images is a deeply important way to inform society. It also plays the vital role of exercising a certain degree of restraint on tyrants and murderers who seek to pillage and kill. For the world’s villains, there’s always a chance that an enterprising reporter will catch them in the act and tell the world.

Among those who spoke on behalf of Chris and other news photographers at his book launch was Jonathan Klein, co-founder and CEO of Getty Images.

“I don’t think he knew how much we cared about him and admired him,” said Klein. “Why is it that we wait until after someone is gone to celebrate them?”

To that end, Klein announced that going forward, Getty will put more emphasis on promoting and celebrating its photographers. It will have more exhibitions, publish more books, and host more events featuring Getty photographers. That includes a May 7 fundraiser at Aperture gallery in Manhattan for the Chris Hondros Fund.

It won’t be Getty’s only act in Chris’s memory, though. Pointing to the high death count in the profession, Klein referred to the “all in, all the time” attitude Chris brought to his work and life. Getty thinks that’s a legacy worth preserving.

“We must not rest until journalists can do their jobs.”