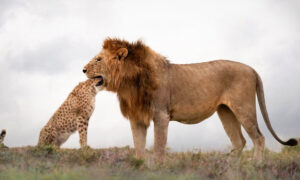 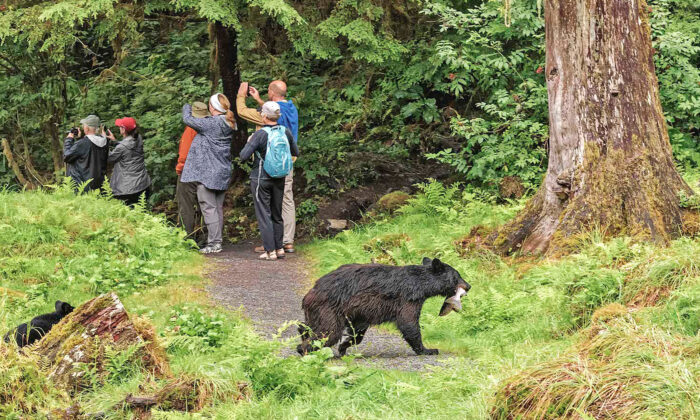 A wildlife photojournalist from Alaska has captured the moment a group of photographers narrowly missed out on a close-up photo opportunity of a mother black bear as she sneakily crept behind their back, carrying a salmon, with her cub trailing behind.

Award-winning photographer Mark Kelley said the group were clueless about the black bear and her cub scooting behind them, as they were held up by a bear in front of them and were focused on trying to snap a shot.

The images were captured at Anan Creek where there is a bear viewing platform in the middle of the Tongass National Forest, Southeast Alaska.

“The bears are free to walk all around and often have to be shooed away from getting too close to the rangers stationed on the platform,” Mark said. “This photo shows a group of visitors moving off the platform and heading down the boardwalk trail.”

He further explained that they were held up momentarily by a bear on the boardwalk.

Describing the scene further, Mark said that there was a set of other people, too, who were trying to capture the image of the bear on the boardwalk, but their view was obscured by the line of people in front of them.

Mark considers himself lucky to have managed to capture the mother bear carrying a salmon, and a cub trailing behind her.

“Timing and luck has a lot to do with getting this image,” Mark said. “The mother bear caught this salmon in the creek right next to the viewing platform.”

The bear, he says, did not waste time trying to pass the platform and wanted to be away from other bears who might have stolen her salmon feast.

“The time between the bear catching the fish and the bear disappearing into the woods lasted just 20 seconds,” Mark said, referring to the shot. “The right moment, when she is properly framed in camera, only lasted a couple of seconds.

“I thought that I better not miss that moment.”