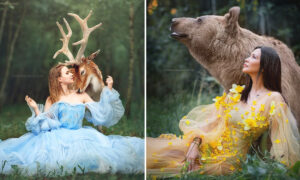 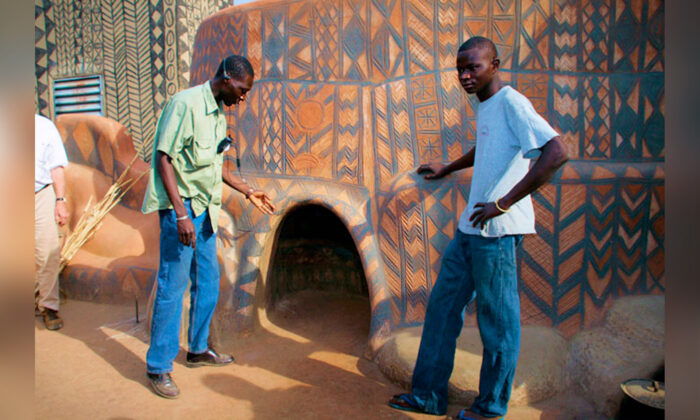 Traveling blogger Olga Stavrakis and photographer Rita Willaert gained entry into an isolated West African village in Burkina Faso, where they documented an extraordinary people living in a habitat like no other.

The obscure village of Tiébélé is home to the Kassena people.

First settled in the 15th century, Tiébélé covers 1.2 hectares and is located at the base of a hill, facing toward the vast savannah. The Kassena people are among the most organized and oldest ethnic groups in Burkina Faso, their ancestors dating back many centuries.

Remarkably, much of the village is completely subsumed by art—from the structures, to the painted motifs covering the walls. Most notably, the royal residences of the village, consisting of uniquely-shaped clay dwellings, are adorned with lively and intricate hand-painted geometric patters, which distinguish them from the more common houses.

The painted decorum has social significance, indicating a resident’s importance in the village; the more highly adorned the house, the higher the owner’s status. And for extra security and protection, the doors of royal residences are crafted smaller than those of ordinary houses, so that one has to stoop in order to enter.

“The palace is a series of mud brick rectangular buildings distributed inside an enclosed compound, it belongs to the chief’s family,” Stavrakis wrote on Flickr, where she chronicles her journeys.

At the time when the travelers visited in 2009, the village chief had died a year earlier, and his son, who gave them a tour of the palace, could not take over until funeral rites were completed.

The former chieftain’s son divulged that finances were the cause of the delay; they were in the process of collecting enough money to pay for cattle and food for a proper feasting.

The visitors delved further into the village’s clay houses, discovering simple kitchen structures stocked with just a few iron and clay pots. Most meals are prepared in a common pot over a brazier.

“The meals usually consisted of a starch foofoo or thick paste like porridge which is then dipped into a sauce of vegetables and peppers,” explained Stavrakis.

The villagers of Tiébélé have preserved this culture and unique way of living for a very long time.

Among their traditions, they maintain a distinct rule of dress based on a person’s social standing.

“We were told in advance that we must not wear anything red and we may not carry an umbrella,” Stavrakis told My Modern Met.

“Only the chiefly noble family is permitted that privilege and to do so would constitute a great affront to our hosts.”

During their visit, Stavrakis and Willaert’s hosts entertained them with a show of dance and comedic performances. The village gathered to take in the festivities, with royalty also in attendance.