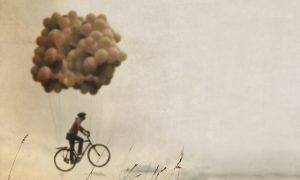 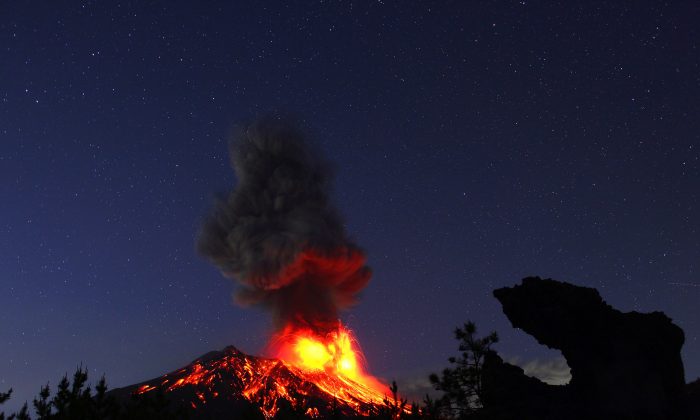 NEW YORK—As a child growing up near the forests and ponds of rural Japan, Takehito Miyatake spent the springtimes digging up bamboo shoots and his summers catching fireflies. He later studied photographic engineering at the Tokyo Institute of Polytechnics. Today, as a nature photographer, the he captures through his 4×5 digital camera the magic of volcanoes, shorelines, and forests.

“We can feel that the earth is alive when we are living in Japan,” he said through interpreter Atsumi Sakato. Miyatake spoke with Epoch Times at Steven Kasher Gallery, where his latest work is exhibited.

“The feeling that we are living on a very active planet—I want to convey this to the viewers of my photographs. Generally speaking, the Japanese have a sense of respect and awe for nature, and see it as very mysterious.”

Situated at the junction of four continental plates, Japan was born of violent rains of ash and lava. It’s also a country where city lights and fireflies blink in syncopated rhythm. Miyatake’s photographs reflect Japan’s nocturnal landscape—the drama and the tranquility, the modern and the mystical.

Miyatake was born in Osaka in 1966 but spent most of his youth in Tokushima on Shikoku island.

One of Miyatake’s favorite locales is Sakurajima, one of the world’s most active volcanoes. Half a million people live a mere 5 miles away in the city of Kagoshima.

To photograph Sakurajima, Miyatake scouts out a spot where a volcano would be visible. Then he reascends the mountain at night, parks his car in a U-turn position, keeps protective headgear at the ready, and waits for the mountain to stir. If he chances upon the volcano when it is active, he only needs to wait three hours; if he’s unlucky—as it happened once—two weeks.

Several photographs in the present exhibit are results of these expeditions. Sometimes he catches lava and lightning in the same shot, red and blue, as if earthly deities chose Sakurajima as the site for a duel.

If Miyatake’s photos feel like poetry, it’s because they are inspired by poetry—specifically waka, a Japanese form that takes the syllable pattern of 5-7-5-7-7.

“Photos are a little snapshot of nature. In a few syllables waka express something about nature in a very concise way,” he said. “There are certain commonalities between the two.”

Miyatake favors wakas because they are not as short as haikus, which follow the pattern of 5-7-5. With an extra 14 syllables, a waka can accommodate juxtapositions, such as in the following poem, clumsier though still evocative when translated:

“Fireflies hover above the water-filled rice paddy; the reflection of their lights seamlessly continue in the faraway starry sky.”

In one of Miyatake’s more abstract photos, fireflies leave trails of green light behind them as they dip and swirl. Far beyond the tree line, the Milky Way slides across the night sky.

According to Miyatake, some people in Japan say that fireflies house the spirits of the dead. Others say that the soul goes to a world beyond ours.

In classic Japanese fashion, beauty is wrapped up with melancholy in each of Miyatake’s images. The natural world inspires awe precisely because it is able to fill us simultaneously with admiration and terror.

“This is something that we who live in Japan have to live with,” said Miyatake. “We have experienced many repeated earthquakes but we have survived up to now, and somehow we have used wisdom and respect to live with this active nature. Going forward we still have to do that.”