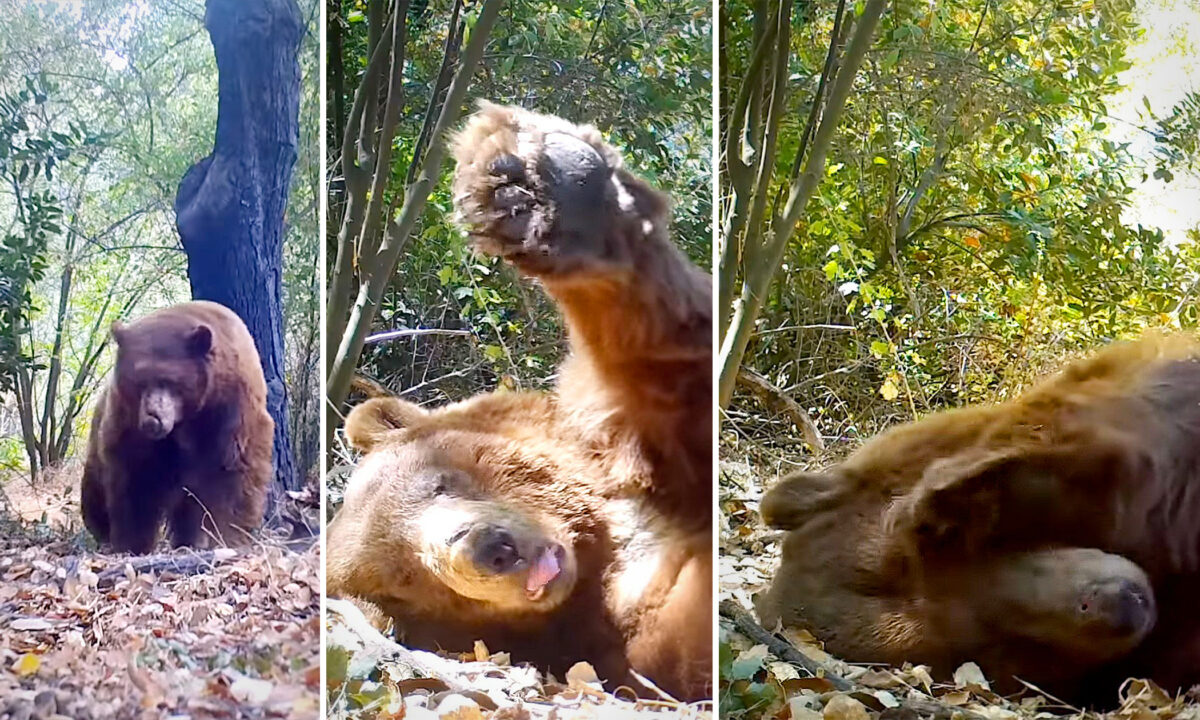 Like a scene from a children’s storybook, a black bear was videoed taking an impromptu nap by a photographer’s trail camera in a valley in Los Angeles National Forest.

Southern California nature photographer Rob Martinez, 49, couldn’t believe his luck when he arrived on scene and checked his footage. It showed the bear entering the frame, adorably making a bed in the clearing, and conking out for a siesta.

“I couldn’t believe it, it was jaw dropping,” Martinez told The Epoch Times. “He spent four hours napping, stretching.”

Martinez had earlier spotted stomp marks on the ground nearby, an indication of bears marking their territory, and thought this area would yield a good shot.

He had no idea how good.

He had sighted this bear previously, about a quarter mile away on one of the photographer’s other trail cams. He speculated the animal had traveled throughout the night, deciding to stop for a rest at around 7:40 a.m.

“I had high hopes, I did not think at all I would see the bear right in the frame like that,” Martinez said. “That was a big surprise.”

The motion-activated video shows the bear lumbering into the frame, making a bed on the forest floor, before settling in. He makes the most adorable poses during his snooze, then wakes around noon.

Martinez has been following this particular bear—named Wilford—since as early as 2019. He is distinguishable from other black bears by a scar on his nose, which Martinez thinks was probably sustained in a fight with another bear over mating or territory.

The photographer has been setting up camera traps in Los Angeles National Forest since 2012, initially hoping to sight mountain lions, but has spotted dozens of bears in the valley as well.

Black bears appear during mating season in the spring and summer months, before disappearing from sight for most other times of the year. They mark territory as a means of communicating with other bears nearby.

“They like to rub on trees,” Martinez said. “They scent rub, which means they rub their back on there and scratch their back, their head; they’ll turn around and hug the tree. Wilford clawed the tree.”

Besides black bears and mountain lions, Martinez has recorded bobcats, deer, and other species of wildlife.

Through his photography, he hopes to raise awareness about wildlife, he said, by showcasing “what animals do when nobody messes with their territory, undisturbed, unfragmented habitat—this is what you get to see.”