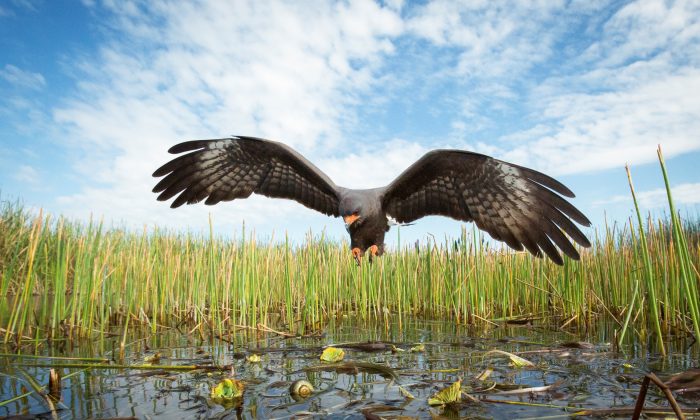 A snail kite hunts for apple snails in the Florida Everglades. The Everglades snail kite is the most specialized raptor in the world, and was also one of Mac Stone's most challenging subjects. (Mac Stone)
Careers

Ennobling the Everglades
By Eva Pomice

When it comes to his beloved Everglades, photographer Mac Stone doesn’t like the word “fragile.” The Florida wetlands may be imperiled by pollution and development, but they are also, he argues, resilient.

Stone, 34, spent five years venturing into some of the swampland’s most inhospitable depths to capture images of everything from majestic cypress forests and flights of rare birds to sharks navigating the roots of mangroves. His book “Everglades: America’s Wetland,” containing 240-luminous photographs and also essays by leading conservationists, documents what he calls “a different kind of wild.” His Ted Talk on the subject has drawn more than a million viewers.

A vast network of forests, prairies, and wetlands that extends from the Kissimmee chain of lakes to Florida Bay and covers a third of the state, the Everglades defies easy definitions. It has been viewed with antagonism, by everyone from white settlers hundreds of years ago to today’s developers, as a swamp to be hacked and paved over. Considered haunted and dangerous, its black waters have exerted an outsized influence on the American imagination. A World Heritage Site, it is home to thousands of species of wildlife, many of them endangered.

Stone, a native Floridian, captures the strange beauty of this primordial wilderness and wants to inspire Americans to experience its abundance for themselves.

Here, the award-winning photographer talks about his work.

Your photographs are a love letter to your home state. What was your experience growing up there?
Mac Stone: At 14 or 15, I was looking for some kind of independence, to stake my claim on that independence. The way I got it was to go outside, look for fossilized shark teeth in the riverbeds, creek beds, and wander the sloughs and backwoods of my hometown, dodging alligators and snakes. I grew up in Gainesville, and to me that was normal. I grew up where people long before me made the decision to protect local pockets of wilderness. Not only for reasons of hydrology or ecology but also for the fundamental right that we have to get to know the places we come from.

Did you know then that you wanted to be a photographer?
Mr. Stone: I was falling in love with the wilderness at the same time I was falling in love with photography. Every time I would go outside, I would see something new and tell my friends about it, and they’d say “no way.” I started taking photos to share the stories with my friends. I realized that the better the photos, the more impactful the story would be.

I immersed myself in how to render light and artistically express the scenes I was shooting. But I didn’t think becoming a professional photographer was feasible. After I graduated college, I took my first job teaching photography to children in Honduras. They taught me how the camera can transform into a megaphone that helps to advocate for the protection of the places we hold dear.

What inspired you to photograph the Everglades?
Mr. Stone: Once back in the States, I moved to the Florida Keys to work as a wildlife biologist in the Everglades for three years. That’s where I cut my teeth to begin this body of work.

My very first introduction to the Everglades came when I was 15. My dad and I took a kayaking trip and paddled the Everglades for five days. It was a totally different landscape from where I grew up in North Central Florida. Instead of live oaks with Spanish moss, there were mangroves and orchids. It was transformative for me. I had never seen so much wildlife in one place.

You point out that the Everglades preserve is less appreciated than other national parks. Why the misconceptions?
Mr. Stone: The word “Everglades” is associated with the word “swamp,” which is unfairly associated with bugs, mud, and icky feelings. We’ve taken an adversarial attitude to the wetlands and swamps ever since our ancestors tried to drain them to make them habitable. Things live in these wetlands that can humble you: snakes, alligators, crocodiles, and mosquitos. But, they are some of the most serene and beautiful natural areas in the world.

How do you hope that your work will change that?
Mr. Stone: The Everglades is somewhat of an abstraction. The purpose of these photos is to make the Everglades a tangible thing, to make images that burn in people’s minds and show them that this is a wilderness we should be proud of, like Yosemite and Yellowstone, places we all consider collective goods and resources that we all benefit from.

My goal is to be accurate in my representations—to show the softer side of the Everglades and also the edgy side, like alligators and snakes with their mouths open. There is an incredible tapestry of ecosystems within this watershed and the wildlife that lives within.

Why is the Everglades ecologically important and what threats does it face?
Mr. Stone: When you say Everglades, people typically conjure a swamp, but it’s a watershed that includes reefs, estuaries, ponds, and beaches, and all of that depends on this river of grass flowing from Lake Okeechobee south. When we turn on the tap, that is the Everglades working for us.

The management scheme through the mid-20th century sought to drain the Everglades. The problems we are seeing today are predicated on a system not built on scientific hydrodynamics but on the notion of converting swamps to developable and agriculturally viable land.

Now we see the red tide—algae blooms—threatening both coasts. Lake Okeechobee, which was dammed up to make agriculturally viable land, is heating up in the summer. We dump it out east and west instead of allowing it to flow south as it originally did and filter through swamps before it reached Florida Bay, the terminus of the Everglades system. Today, only a third of the water that once reached the bay ends up there.

What lessons does the Everglades have for other watersheds?
Mr. Stone: There’s a famous quote that says, “The Everglades is a test. If we pass it, we get to keep the planet.”

If we can restore the Everglades, we have finally found a way to solve the age-old question: How can people and nature survive together? It would provide a framework for wetlands restoration all over the world.

You spent five years documenting these wetlands. What was your most challenging shot?
Mr. Stone: The photograph of the Everglades snail kite, the most specialized raptor in the world. There used to be thousands of nesting pairs, and now there are 400. It feeds only on apple snails the size of Ping-Pong balls. We went to a hotspot in Lake Okeechobee to photograph these birds plucking them off the surface of the water. I spent a week slogging through wetlands, standing in waist-deep water with a camera trap, watching birds fly. Nothing happened. I noticed little behavioral tricks. Nothing happened. I was so strung out that I left for a while, talked to biologists, went back down ready to dedicate another 10 days, and eventually noticed them flying in a different flight line. I took the trap with the apple snails in it and moved it, and on the third day the kites started snatching snails right in front of my camera. I was so elated. The sun was setting and it was the best possible light you can have. I was firing the camera, thinking I’m a genius. And I walked over to my camera and saw that not a single photo was taken. The wireless trigger had malfunctioned. But at that point, I knew where the kites were feeding, and over the next four days, I went back every day and made the photo that became the cover of the book.

Tell us about your current project.
Mr. Stone: I am an inherently nostalgic person. I love the idea of discovering what it would be like if I could visit swamps 200 years ago, before we started draining and clear-cutting them.

This year, I am documenting three old-growth swamps in the Everglades and South Carolina. Some have trees that are over 2,000 years old. I am photographing what the Southeast used to look like, before we harvested, cut down, drained, and damaged it.

I want to reveal these areas as they should be: historic, unbelievable wildernesses full of life. It is in homage to what we still have, historic pockets of how our country used to look, that sparks a sense of pride of ownership and stewardship.

I spent the last four months trying to make one photograph and will likely spend another four months next year doing the same. I am trying to unravel a secret long debated and questioned by scientists, which is “what pollinates the ghost orchid?” It’s detective work rooted in science. We are spending a lot of time trying to tell the story of the ancient relationships of these ancient landscapes.