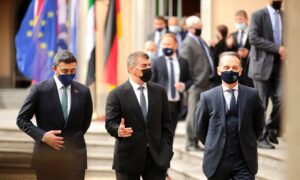 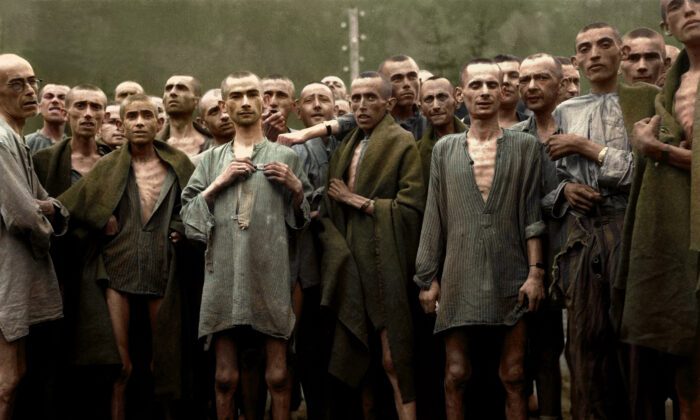 Photographer Colorizes Holocaust Photos, Bringing Them to Life ‘So This Never Happens Again’

Photographer Tom Marshall has grabbed the attention of thousands by adding color to black-and-white photographs of the Holocaust, making distant-seeming faces seem vivid and recognizable.

His updated photographs are both striking and horrifying, bringing to light the depth of suffering that happened in the concentration camps of World War II.

Marshall, who is known for restoring historical photographs to color, called the project “the most harrowing photo restoration project” he has ever worked on.

“This week the world held Holocaust Memorial Day, marking 75 years since the liberation of Auschwitz concentration camp by the Soviets,” he shared with Bored Panda in February 2020.

“And to mark this anniversary, I have colorized a selection of historical photos taken throughout the first few months of 1945, as the rest of the world became fully aware of the horrors of the Nazi holocaust.”

His photographs soon went viral, with over 600,000 views on the website alone.

The photographer pointed out that adding colors to these photos was a challenge because the photos do not feature your usual run-of-the-mill subjects.

“The photo editing and colorizing process was also different as these people were close to death by the time of their liberation, so painting skin tones was utterly different,” he explained. “In color, you can see the bones and the pale, bloodless skin, and even young men look older with graying hair and dark patches around their eyes.”

By sharing these images, Marshall hopes to “keep images like these relevant and shocking, so this never happens again.”

Perhaps no more than a child, this young man resembles a “living skeleton.” This photo, taken at Ebensee concentration camp, unfortunately was not an uncommon sight at camps throughout Europe.

Two starved men stare into the camera after being liberated from the Gestapo concentration camp Lager Nordhausen. They had lived among 3,000–4,000 beaten, mistreated, and starved inmates.

Marshall restored a still taken from the Soviet film of the liberation of Auschwitz in January 1945, depicting children kept in captivity.

Here, 31,591 deaths were reported, with hundreds dying every week, the most common causes of death reported being disease, starvation, and suicide. Under these horrific conditions, this young woman came to appear much older than she actually was.

Emaciated from starvation, prisoners in a concentration camp in Ebensee, Austria, pose for the camera. Scientific experiments were reportedly conducted at this concentration camp, which, according to The Holocaust Encyclopedia, was liberated by the U.S. Army in May 1945.

The prison camp of Bergen-Belsen was infested with typhus. After the prisoners were freed in May 1945, the British Army burned it to the ground. This photo was taken by Marshall’s great-grandfather, Charles Martin King Parsons, who was a chaplain with the British Army.

Also taken by the photographer’s great-grandfather, a photograph of the mass graves at Belsen depicts the horrific death count from the concentration camp at Bergen-Belsen. Marshall said he chose not to colorize it, as it “didn’t feel like the right thing to do.”

Perhaps he’s right. That photo can be seen here. It is a shocking reminder of where tyranny can bring us if good people do nothing to prevent it.