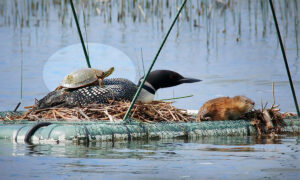 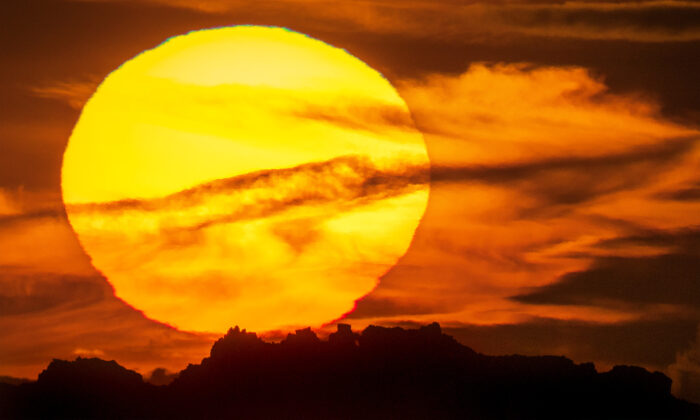 Spectacular photos show a glowing sun setting behind an ancient rock formation in the Shropshire Hills—made famous by a D.H. Lawrence novel.

Andrew Fusek-Peters, 54, captured the breathtaking sight as the sun descended behind Devil’s Chair in the Stiperstones National Reserve at 9:20 p.m. on June 7.

The hills boast some of the oldest rock formations on the planet at 480 million years old and were made famous by the D.H. Lawrence novel “St. Mawr.”

The wildlife photographer had been out taking photos of hares and birds when he noticed the cloud cover making way for a stunning summer sunset.

He captured the images on his Olympus E-M1 Mark III camera with a 1,000 mm lens from over two miles away on the Long Mynd.

“I had been on the hills taking photos of hares and cuckoos and all of a sudden I noticed the clouds descending and thought this sunset could be perfect,” said Andrew, of Lydbury North, Shrops.

“I was around two miles away with a 1,000mm telephoto lens and the conditions ended up being just right, it was a spectacular sight.

“I was running up and down the hills trying to get in the right position as the sun got lower and I managed to get the sun as it touched the rock.

“I think the clouds make it all the more atmospheric, especially considering the mythology surrounding the place.

“That rock formation was said to have been formed when the devil wanted to drown the people of Shrewsbury but somebody cut a hole in his apron and all the rocks fell out and formed the Devil’s Chair.

“He is said to sit up there smoking his pipe when he is angry and that is why the mist descends over the hills.

“It’s a wonderful story and an iconic place to visit, I thought the results were awesome and the clouds really give it another dimension.”