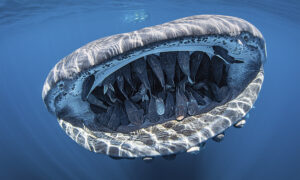 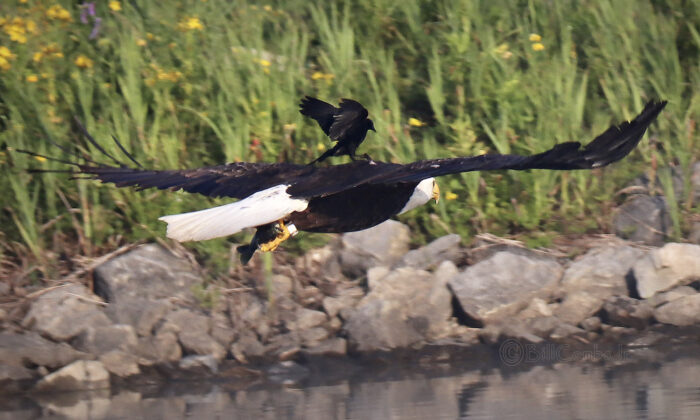 It’s a scientific fact. Just like some people who lack the means to get from place to place on their own, relying on others for rides, hitchhikers exist in the animal kingdom too.

There’s the ray-finned remora fish—also called the “sucker fish” because of its suction cup dorsal fin—specifically adapted to latch onto sharks, to ride and feed in a symbiotic relationship.

Less well documented is the small Egyptian plover bird, or crocodile bird, which is rumored to perilously clean the reptile’s teeth by feeding on decaying scraps of meat inside its mouth.

A bird riding aloft another, larger bird though?

That’s hardly a common, or expected, sight. But a wildlife photographer based in upstate New York saw just that, and captured the moment vividly on camera.

On July 9, local nature photographer Bill Combs Jr. posted on Facebook photos he took of a red-winged blackbird making a mid-air landing on a bald eagle that would make Top Gun’s Maverick look like child’s play. The aerial acrobatics occurred over Cobleskill Reservoir in Schoharie County.

The bald eagle was flying over the water clutching a fish it caught in its talons.

Then the red-winged blackbird appeared from above and landed on the airborne eagle.

Combs has taken many other photos of bald eagles, including one against the backdrop of an American flag.

Combs’s post drew hundreds of likes and comments, and was shared widely, including by officials from New York State Department of Environmental Conservation (NYSDEC) the following Monday.

In his post, Combs commented that the blackbird was hitching a ride on the eagle’s back, but some readers think otherwise.

“That red winged blackbird isn’t hitching a ride, he’s protecting his territory,” said Carrie Philippi. “They are fearless and will attack anything.”

But apparently the blackbird was not as aggressive, and stayed on the eagle’s back for some time.

“I was there took the photos 20 different shots it rode on it’s back for a good 150 ft the proof is in the photos,” said Combs in his reply to Philippi.

Not the First Blackbird-Eagle Sighting

Last year around July, a red-winged blackbird was sighted atop a bald eagle in Minnesota, reported CNN.

Nature photographer Jason McCarty captured the shot near his home.

He believed the blackbird was not actually hitching a ride. He said blackbirds were “very territorial” and not afraid to attack far larger animals, including birds of prey and humans, who venture near their nests.

But physically riding on the backs of their predator is an unusual tactic, said bird expert Kenn Kaufman, according to the National Audubon Society.

Kaufman said red-winged blackbirds and other smaller birds like crows, grackles, and kingbirds would not hesitate to aggressively defend their nests against birds of prey like hawks, vultures, and eagles. This behavior is especially common during the nesting season.

When a larger bird is harassed, usually it would either react aggressively or ignore the smaller bird, “just as we might ignore a small dog yipping at our heels,” said Kaufman.

Or maybe the larger bird would have a harder time fending off an aggressive smaller bird.

In May 2013, another photographer captured a series of photos of a red-winged blackbird going after and landing on the back of a red-tailed hawk, reported SFGATE.

“The blackbird actually landed on the hawk multiple times,” Dugan said. “The small bird was so far more maneuverable in flight that all the hawk could do was tolerate it and fly away.”