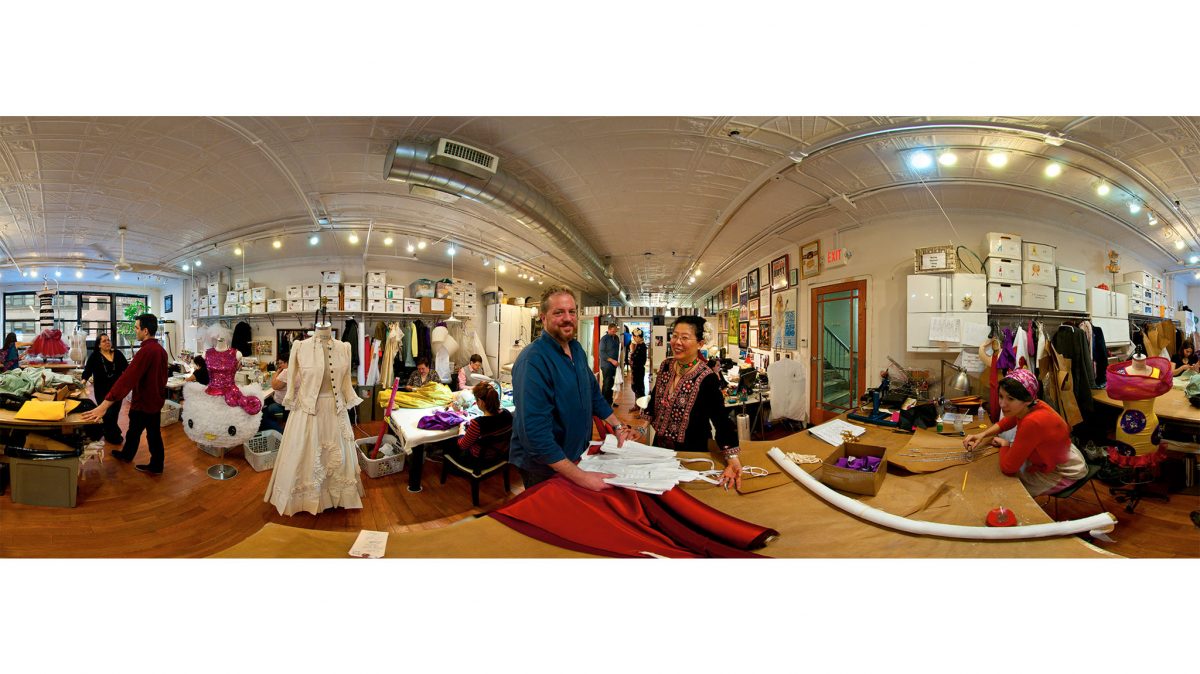 Exhibit opens at Library for the Performing Arts
BY Mark Kennedy TIMENovember 18, 2014 PRINT

NEW YORK—The lights of Broadway are bright but they don’t shine on everyone.

Many of the creative forces who make the costumes, lighting, wigs, and sets never bask in the attention or hear the roar of the crowd. They work long hours, often virtually anonymously.

Enter Stephen Joseph, a professional photographer from California who has turned his lens on the folks who stitch, knit, paint, sketch, build, and wire for Broadway shows.

In a new free exhibit at The New York Public Library for the Performing Arts at Lincoln Center, Joseph is displaying 114 large works that capture the men and women who create the real magic.

He’s used some high-tech magic of his own: Each image is a set of multiple photos stitched together with Adobe Photoshop that offers a 360-degree portrait of creative people like scenic designer John Lee Beatty, milliner Lynne Mackey, and hair designer Tom Watson.

“These people don’t get a bow. They win lots of Tonys but they don’t get to be highlighted,” said Joseph. “So this is highlighting the creative people behind Broadway.”

The exhibit, called Broadway Revealed: Photographs by Stephen Joseph Behind the Theater Curtain, and running through Jan. 31, is a strangely intimate look since the works range in size from 10-by-30 inches to 24-by-72 inches. Because each image is a 360-degree view, the perspective is distorted, with straight lines looking curved. Only natural light was used.

To create them, Joseph set up a tripod with his Nikon D800 in the subject’s studio and shot in a full circle over about an hour, dividing the panorama into eight vertical segments. He took four or five images in each segment, capturing workers moving around, animals dozing, and artists collaborating.

“Once the shot is taken, then it’s back to the computer where it’s really many hours of work to slice everything together, get all the light balanced and then stitch the image,” said Joseph. “It’s fitting together a jigsaw puzzle.”

Some of the images are designers showing off their sketches, others show the same person numerous times as he or she moves around their workshops. In one, Joseph captured lighting designer Brian MacDevitt inside a favorite cafe and humorously put him in 17 times, at every seat and counter stool.

Forget about trying to see the joints between two photos. Joseph, an environmental photographer in the Bay Area, is from a family of Hungarian tailors and he’s fulfilling a family legacy. “I’m doing digital stitching,” he said. “You can’t see any seams.”

The idea for the exhibit—organized by the Bedford Gallery at the Lesher Center for the Arts in Walnut Creek, Calif.—started as a tribute to his mom, who loves Broadway. It took eight years to create during his frequent trips to New York, getting workshop doors to open for his camera via word-of-mouth.

Other highlights of the show include a 360-degree shot of the audience and cast at the premiere of “American Idiot” at the Berkeley Repertory Theater in 2009, and a panorama of the inside of the Foxwoods Theatre during the creation of “Spider-Man: Turn Off the Dark.”

To add texture to the images, the exhibit includes some of the work that has emerged from the workshops—costumes from “Wicked,” ”Hair,” ”Follies” and “The Merchant of Venice” and footwear from “Kinky Boots.”

“I’m trying to show behind the scenes to what it takes to create a Broadway production,” Joseph said. “To be able to document what they do is really special.”