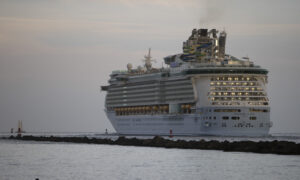 Update: Ryanair released a video on Oct. 17, below, that shows Ryanair flight crew  members staging the image of them ‘sleeping’ on the floor of Malaga airport. The image had been used to imply that flight crews slept on the floor after they were stranded during a storm.

Images of exhausted flyers enduring sleep on the cold, hard floor of an airport, stranded by airline failures, aren’t that unusual.

Unless it’s the flight crew.

At first glance, the image of a Ryanair flight crew at Málaga airport in Spain on Oct. 13 appears to show them crashed out, forced to sleep on the floor after they were stranded by storms.

The 24 staff, from four flight crews, complained that they were offered no accommodation during their overnight wait.

But Ryanair, no stranger to controversy, claims that the photograph was staged, that no one slept on the floor, and is adamant that there were no local hotels available as four planes were diverted due to a storm.

The image appears to have first been widely circulated on Twitter by Jim Atkinson, an outspoken former Ryanair pilot.

“This is a Ryanair 737 crew based in Portugal, stranded in Málaga, Spain, a couple of nights ago due to storms. They are sleeping on the floor of the Ryanair crew room,” he wrote.

This is Porto crew last night stranded on the floor of Málaga crew room. They were diverted due to the storm and the company left them there.#RyanairMUSTChange

Peter Bellew, Ryanair’s chief operations officer, replied, writing, “Unfortunately all hotels were completely booked out in Málaga. The storm created huge damage in Portugal. Later after this the crew moved to VIP lounge. Apologies to the crew we could not find accommodation.”

In a later statement, Ryanair said the crew returned to Porto the next day, but did not operate any flights.

“Due to storms in Porto (Oct. 13) a number of flights diverted to Malaga and as this was a Spanish national holiday, hotels were fully booked,” said the Ryanair statement via email.

“This picture is clearly staged and no crew ‘slept on the floor.'”

As some social media comments noted, all the faces were covered or facing away from the camera, and the only visible mouth appearing to smirk, the image.

Despite initially describing the crew as “sleeping on the floor,” Atkinson later wrote on Twitter, “It is openly admitted by the people in the photo that it is a “protest picture.”

The Portuguese Union, SNPVAC said that the crew were stranded in the crew room from 1:30 a.m. until 6 a.m. (local time).

In a statement posted to RyanAir protest group RyanAir Must Change, the union said that the crew had no access to food or drink and that there were only only eight seats available for the 24 crew.

“They had no other choice, as the photo illustrates, than to attempt to rest on the room’s floor.”

“Around 6 a.m. the 24 crew members were placed in the airport lounge, where they stayed for more than four hours but still with no access to food or drinks.”

In a Twitter exchange, Atkinson admitted that he had paid to promote his initial Tweet, saying “I thought it was socially important and it only cost me €45 (US$52) out of my own pocket. As of this writing, views are about 90% ‘organic’ and 10% ‘promoted.'”