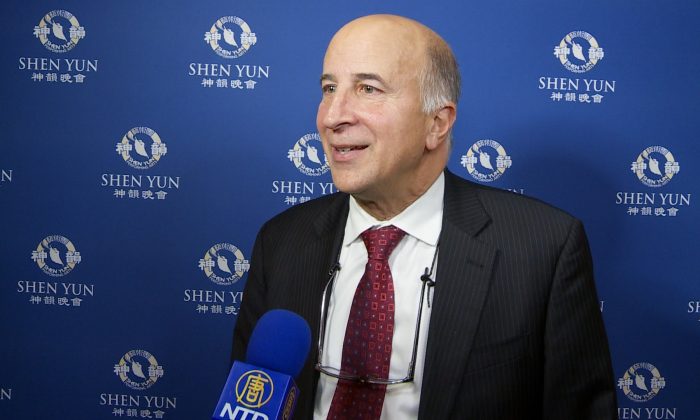 PHILADELPHIA—Shen Yun means the beauty of divine beings dancing. With this standard as their goal, dancers of Shen Yun Performing Arts seek to enchant audience members not just with their movements, but also with their hearts.

Philadelphia city councilman Mark Squilla was indeed able to feel a sensation beyond a mere appreciation of their physical prowess.

“You could tell … how excited they are to be here, the smiles on their faces, and that it’s really not a job for them,” Squilla said.

“It’s them willing to show how they feel inside, bringing that divinity from inside out.”

“And to share that with everybody who’s watching it—You can feel it.”

The councilman accompanied by his wife, Brigid, watched the performance for a second year at the historic Merriam Theater in Philadelphia on Feb. 15. The New York-based company is currently touring the world with six equally-large contingents travelling to more than 130 cities to revive 5,000 years of traditional culture on stage through music and dance.

Shen Yun dancers, besides being rigorously trained in classical Chinese dance, also focus on improving their character to ensure their inner world reflects a state of positivity worthy of sharing with the audience.

Many of the dancers also practice Falun Dafa (or Falun Gong), an ancient spiritual practice originating from China that involves meditation exercises and a set of teachings centered around the principles of Truthfulness, Compassion, and Tolerance.

This inner refinement shined through the dancers, Squilla said, and it had a special effect on the audience.

“You feel alive and you feel good about yourself [when you’re watching it],” he said.

“I think that the dancers that are there performing actually [transmits] that onto the audience.”

“They feel good and it makes you feel good.”

By telling stories from ancient China to the modern day through dance, Shen Yun aims to display the essence of traditional Chinese culture, one that is rooted in belief in the divine.

With such a belief system, Chinese people emphasized moral development and valued principles that led to harmony between Heaven, earth, and men, such as compassion, righteousness, and loyalty.

“[Shen Yun] show[s] how morality and how love is so important to the world today,” Squilla said.

“If you really have that faith it will conquer evil and you will be able to live a happy, moral life, not only here in the United States, but throughout the world.”

Some stories also depict the persecution of practitioners of Falun Gong in present-day China. The spiritual discipline was banned by the Chinese Communist Party in 1999 after it ballooned in popularity with around 70 million people practicing in China at the time. People who are discovered practicing are subject to punishment, including imprisonment and indoctrination at brainwashing centers. Many practitioners have been tortured to death in these facilities.

Squilla said it was sad to see suppression of faith still occurring today.

“But it’s also rewarding to see that people are still willing to fight for those rights, and to have those rights, and how passionate they are about it, and won’t give it up no matter what the consequences may be,” he said.

This also made the councilman appreciate the freedoms granted in the United States.

“We’re allowed to disagree with each other and not have the same feelings, or the same mindsets,” Squilla said.

“We’re all allowed to live in this country and not be persecuted for it.”

In closing, Squilla expressed his thanks and admiration for those who put the performance together.

“[The performance is] unbelievable—It’s the best thing anybody could ask for,” he said.

“It’s an amazing show, it’s a rewarding show, and it’s a learning show.”