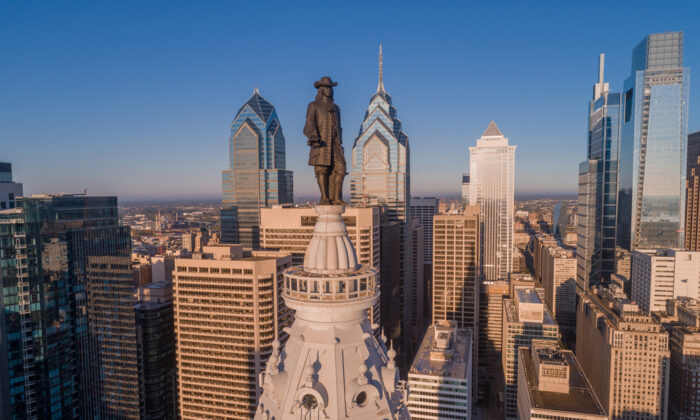 William Penn presides over Philadelphia. The City Hall was the tallest building in Philadelphia for 86 years, due to the respect afforded Penn: One should not build higher than Penn's hat. Times have changed. Although no longer the tallest in the city, the building now has an observation deck below the statue that offers visitors a chance to nearly join Penn and enjoy an expansive view of the city he founded, Philadelphia. (Photosounds/Shutterstock)
Fine Arts & Craftsmanship

Larger Than Life: Art that inspires us through the ages
By James Howard Smith

The Philadelphia City Hall is like a distinguished gentleman, who is noble in his contribution to the city, has integrity in material and structural elements, and who possesses a refined and cultured disposition.

The location of City Hall was originally outlined in the 1682 city plan by William Penn, the founder of the Province of Pennsylvania. It is centrally located at the crossing of two major streets in the city’s center. Construction of the building began in 1871 and was completed in 1901, realizing the plan’s original intention to hold a commanding position in the city.

The architects John McArthur Jr. and Thomas Ustick Walter designed the building in the French Second Empire Style, originating under Napoleon III in mid- to late-19th-century France. The style drew on those preceding it, including French Renaissance and Baroque, and produces a graceful composition that transcends time. It continues to arouse delight and fittingly reflects the cultured and finely adorned Penn.

City Hall is still a fully functioning municipal building with close to 700 rooms, housing three branches of government: the Executive Branch, the Legislative Branch, and the Judicial Branch’s Civil Courts.

James Howard Smith, an architectural photographer, designer, and founder of Cartio, aims to inspire an appreciation of classic architecture.