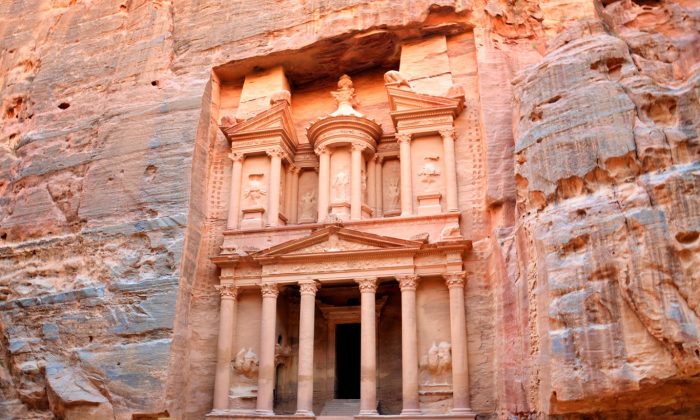 Petra (located just off the town of Wadi Musa) is truly one of the most marvelous gems among all ancient sites. The rose-red city carved out of rocks was naturally protected by the walls of the gorge from one side and rocky mountains from the other. The ancient civilization of Nabataeans that settled in Petra was highly advanced, it managed to achieve something not common in the history of humanity – peaceful coexistence with foreign cultures that enabled to create trade routes and brought considerable wealth to the area.

The common misconception about Petra is that there is only the Treasury worth seeing there (and unfortunately I have seen many people turn back after visiting only this most famous monument!). You should spend at least a full day to explore both the Nabataean and Roman centers and the breathtaking trails – to the Monastery and to High Place of Sacrifice. Although it can be a bit strenuous and challenging, it is possible to see all this in one day. In this article, I will describe The Treasury, The Nabataean ancient city center and the trail to the High Place of sacrifice. In the second part, I will feature the Roman center and the trail to the The Monastery.

Is Petra Safe to Visit?

Many people would like to visit Petra but change their minds because of the situation in the neighboring countries – I have in mind especially the civil war in Syria. I asked this question myself too, but after visiting Jordan, I can assure that it is perfectly safe. However, the tourism industry suffered a lot and there are not as many tourists in Jordan as before. Nevertheless, Petra is still very crowded and visited by many. And, it is not overrated like some of the other popular destinations. I would say it’s even underrated, considering the size of the whole area to explore.

How to Get to Petra

There are many ways to get to Petra. Even if you are not visiting Jordan, daily tours to Petra are operated from Israel. From within Jordan, you can take buses from Amman – Abdali bus station – it departs at 6:30 AM and from Petra at 4:00 PM. The cost is around 20 JOD (21 EUR, 28 USD). Current timetable may be found here.There are also buses from other cities, like Aqaba.

If you don’t have enough time and only a few days in Jordan, you can book an organized tour – some of them can be very cheap – me and my friend got one for less than 400 EUR (537 USD) per person for 5 days – accommodation, breakfasts, local guide/driver (who drove us all over Jordan) and all entry fees were included in the price.

Talking about entry fees – it’s the only bad thing that can be said about Petra.

However, if you are in Jordan for a few days and have some hotels booked, the charge goes down to 50 JOD (53 EUR, 70 USD)

The ticket says a free guide and a horse ride through the gorge to The Treasury is also included. However, tips are expected and can be quite high and I recommend that you skip the horse ride whatsoever.

As-Siq – The Main Entrance to Petra

Even before entering the main entrance – the gorge to Petra you will come across some interesting ancient buildings. Obelisk Tomb and Bab As-Siq Triclinium perfectly show the connection of different styles – Egyptian influence is clearly visible on top while more classical touch and columns on the bottom. The Triclinium was a chamber used for spiritual purposes by The Nabataeans – a feast was held there once a year to honor the dead.

After a few minute walk you will be standing if front of the gorge – the natural gate and walls protecting and hiding the city from the outside invaders. It had been hidden so much that re-discovery of Petra took place as late as in the nineteenth century!

The best thing about Petra is that it’s not only about the ancient monuments and architecture. The nature plays its role there too. The narrow, 1200 meters (0.75 mile) long passage shaped by the forces of nature is simply indescribable – you will admire it so much that you might think that it can’t get better – until you reach the place where The Treasury emerges from between the pink-orange walls of the gorge. Literally, I could stare at this sight for hours if it was possible.

The columns of The Treasury (Tomasz Lisowski, Adventurous Travels)

The Treasury is the main attraction of Petra. You can find its picture on all leaflets, travel folders and advertisements from Jordan. It is truly impressive. It was carved in the first century AD and supposedly served ad a tomb of an Nabataean king. Some archaeologists believe that it was also a temple.

The Treasury is 43 meters (141 ft.) high and 30 meters (98 ft.) wide. It is carved out of magnificent rose-pink rock with an extreme care for details. The square where Al-Khazneh is located is not very large, surrounded by rocky walls. Therefore you might feel that the site is overcrowded. However if you continue to the center of the ancient city, it will become more spacious and not as many tourists even venture beyond the Treasury!

The High Place of Sacrifice Trail

Right before you enter the ancient Nabatean center of Petra (there is also the Roman one) in front of The Theater, to the left, there is a trail leading to High Place of Sacrifice. The climb is not very long, however it may be a bit challenging but the views will be a reward worth any effort. You can admire the whole Petra city center, the valley and mountains and rocks having different shades of red, pink, orange and brown.

The High place itself was used for important spiritual and religious services in the ancient Nabataean world. It is believed that it was also a site for funeral and sacrificial purposes.

When you get down from The High Place of Sacrifice, give yourself a bit of time for relax and stroll around the main Street of Facades, admiring The amazing Theater (carved in the first century by the Nabataeans) and Royal Tombs. No, The Treasury is not the only beautifully carved tomb in Petra. In the center, you will find the whole streets of more than a dozen similar tombs. They are however not as well preserved as The Treasury which is protected from the winds and other weather conditions by the mountainous walls.

The most important tombs are: Urn Tomb, Palace Tomb and Sextius Florentinus Tomb. Urn Tomb is the largest of all Royal Tombs, around 20 meters (65 ft.) high. Carved in the first century, it was later altered to fit the Roman style and was used as a Byzantine church. Palace Tomb (as the name suggests, resembles a palace) is my favorite, however badly eroded. Sextius Florentinus Tomb is the only one that has a name of the person who was laid to rest there. The tomb was carved in the second century.

Walking further down, you will encounter The Roman Center (Colonnaded Street) and the main temple of the Nabataean people – Qasr al-Bint, before entering the trail to Ad-Deir (The Monastery) – second famous monument of Petra. I will write another post about them in the near future.