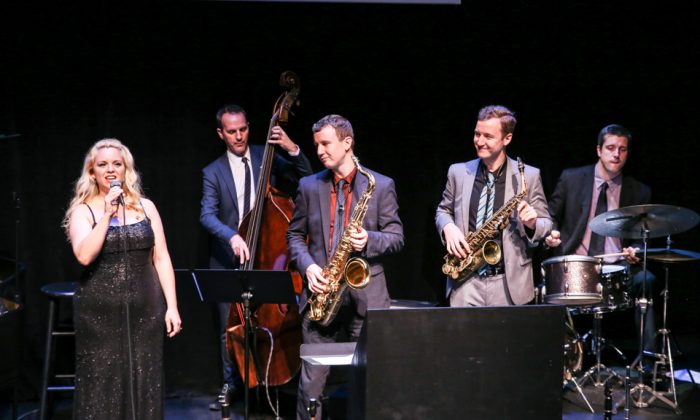 The “Songbook Summit” at 59E59 Theater, with (L–R) Molly Ryan on vocals, Clovis Nicolas on base, Peter Anderson and Will Anderson on saxophones,and drummer Phil Stewart. (Lynn Redmille)
Arts & Culture

Peter and Will Anderson’s ‘Songbook Summit’

NEW YORK—The Anderson’s “Songbook Summit” just wrapped their sixth performance, appearing by popular demand at 59E59 Theater.  The saxophone and clarinet virtuosos Peter and Will Anderson intrigued and satisfied our imaginations—not only with the marvelous music, favorites from the great American songbook played out in Broadway musicals, film, and uptown jazz—but with a storyline of some fascinating composers.

The Andersons, having established themselves with their annual tours and worldwide gigs due to their superb skills and savvy, bring a passion for music they’ve made their own in the world of modern jazz.  With “Songbook Summit,” they devoted one week to each of their four favs: Cole Porter, then Harold Arlen, George Gershwin and lastly, Richard Rodgers, crowned king of melody.

Collaboration was the key to the show’s success.

Collaboration was the key to the show’s success. Hooked on Richard Rodgers’ “South Pacific” at 5-years old, the Andersons, identical twins, complement each other in every way. Drawing from composer Alec Wilder’s insightful book “American Popular Song,” Will did most of the hosting (with a touch of wry humor) and Peter was credited with the masterful instrumental arrangements.

Relationships between great artistic personalities can be tricky, and Will did share nuanced, rarely known stories of the challenges that can precede the “perfect marriage of melody with words.”  He quoted Rodgers’s spot-on description of his fantastic partnering with Lorenz Hart, despite their distinct personalities, and then what moved him to his extraordinary match with Oscar Hammerstein. It was no surprise to the audience that Richard Rodgers was recognized with a pile of trophies, including Pulitzers, Emmys, Grammys, Oscars, and Tonys.

The storytelling of the “Songbook Summit” included the legendary drawings by iconic cartoonist Al Hirschfeld of these great American musical geniuses, interspersed with memorable black and white movie clips, illustrating the luster that spilled over into the exquisite dancing, singing, and acting by stars such as Fred Astaire, Ginger Rodgers, Judy Garland, Frank Sinatra, and Ella Fitzgerald, among so many others.

But, of course, the focus was on the music. The audience was treated to standards like like Cole Porter’s “Begin the Beguine,” Harold Arlen’s “Stormy Weather, George Gershwin’s “Fascinating Rhythm,” and Richard Rodgers’s “My Funny Valentine.”

The Anderson’s exquisite ensemble handoffs dovetailed beautifully for each show in their renditions of the gloriously familiar songs: Molly Ryan crafted the sumptuous tunes with her sultry velvet timbre and her joyful step in rhythm was almost an invitation to dance. Jeb Patton delivered his piano solos with ample color and remarkably little pedal, always listening to support the intimate setting. Their world-class bassists Clovis Nicolas and later Neal Miner, contributed hearty solos and Canadian drummer Phil Stewart balanced the beat and enjoyed his spotlight as well.

At the end of each performance, the encores programmed into the show allowed the twins to bring it home, by introducing one of their own compositions.  Peter’s choice was titled “Blues for Joe.”

One more thing: the warmth and genuine honesty of their music wins followers for the Andersons. These qualities are exactly what they remember from their late teacher, Scottish saxophonist Joe Temperley. And to give back, the twins have established a new scholarship honoring him, to be awarded to two saxophone students beginning this fall semester at The Juilliard School.

You are welcome to contribute to the inaugural “Joe Temperley Scholarship” by visiting here.

Julie Jordan, Founder and Artistic Director of the New York Concerti Sinfonietta, presents the 2017 International Shining Stars in Carnegie’s Weill Recital Hall on October 29, 2017, Sunday at 2 p.m. and on June 1, 2018, Friday at 7:30 p.m.  Dr. Julie Jordan is a Steinway artist and teaches students of all ages and abilities in New York City. All inquiries for masterclasses, lessons and competitions for soloists email: dr.juliejordan1@gmail.com