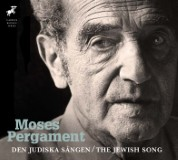 A Memorial to the Victims of the Holocaust
Arts & Culture

The reissue on CD of Moses Pergament’s “The Jewish Song” (“Den Judiska Sang”) on Caprice brings to light a work that has musical and historical significance. Composed in 1944, near the end of World War II, the large-scale composition (for soloists, choir and orchestra) is described by its composer (in a statement contained in the liner notes) as a “choral symphony.” It is a cry of pain in the aftermath of the Holocaust and is unfortunately still timely with the rising anti-Semitism in Europe, including the Scandinavian countries.

Moses Pergament (1893-1977) was born to a Jewish family in Finland. At the time his father (who came from Lithuania) settled there, the country didn’t allow Jewish immigration. An exception was given for those who served in the Tsar’s army in Finland. Pergament grew up speaking Yiddish and Swedish. He studied music in St. Petersburg and settled in Sweden in 1915, where he continued to compose but became known primarily as a music critic and journalist. He was not elected to the Association of Swedish Composers until 1945, supposedly because, as a Jew from Finland, he was not considered Swedish enough.

The work is set to poems by Ragnar Josephson (1891 — 1966), who was not only a poet but also an art historian and theater director.

In the Prelude (titled “In Memoriam”), the Chorus sings that the work is to commemorate the six million Jews murdered by the Nazis. The other 12 sections are poems from Josephson’s two collections: “The Chain” (1912) and “Jewish Poems” (1916).

The title track, sung by the tenor with orchestral accompaniment, speaks of the pain caused by the diaspora. The stanzas that follow are from “Ariel” (a Biblical name for Jerusalem). The men face the threat from the Syrian forces while women’s voices sing of hope.

The soprano’s voice comes in, along with the Choir, on “Spring Night in Ajalon” in which a woman named Zilla leaves her parents forever to become the bride of an enemy. “The Well in Heshbon,” dug by the Jews in the desert, provides relief even in the face of death. “In the Enemy Camp” (sung by the soprano and choir with the orchestra) defiantly accepts all torments, only asking that the singer suffer with her own people. “Prayer for a Gentle Heart” expresses the longing for peace. An interlude sarcastically quotes from “Deutschland uber Alles.”

“The Reviled Word” (by the tenor and orchestra) evokes the murdered generations and the tears of men and women in exile. “Prayer for the Approaching Sabbath” starts with the suffering of the Jewish people and ends with the jewel and the crown of Sabbath. The work ends with a soothing expression of thanks to the Lord for the guiding star and the sun.

The performance is deeply moving, with stellar work by the orchestra, choir and soloists. “The Jewish Song” has been compared to Mahler’s “Song of the Earth.” It also bears a resemblance to Dmitri Shostakovich’s Symphony No 13 in B flat minor (“Babi Yar”), another musical reminder of Nazi atrocities.

The CD booklet contains translations of the texts along with an essay by Lars Silen about the piece and the composer. There is also a note by Pergament, who states that the work is intended to express “an infinite feeling of belonging, even in the midst of great suffering.”

The recording is also a testament to James DePreist, one of the first African-American conductors to have an international career. He was the nephew of the eminent contralto Marian Anderson. DePreist overcame the disability of polio, which he contracted in his twenties. In addition to conducting, he published two books of poetry and received numerous honors, including the National Medal of Arts.