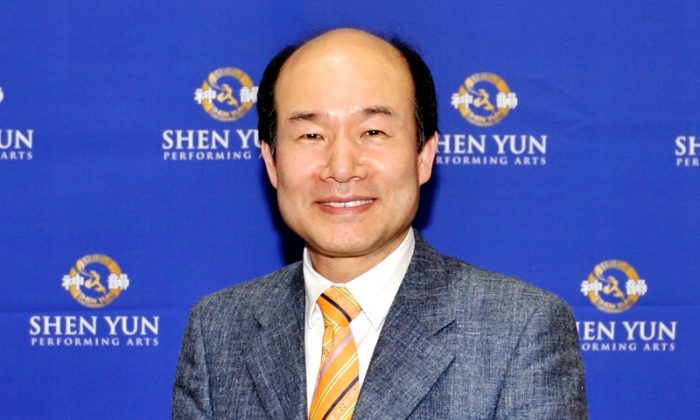 As a composer and conductor of an orchestra in Korea, Kim Hojun expressed that Shen Yun is very unique and innovative, a model for various artistic creations. He explained, “Shen Yun uses ancient Chinese legendary stories as raw material and combines the state-of-the-art technology in the 21st century to come up with a consolidated art to display traditional arts with innovative approaches.”

He also highly spoke of Shen Yun music. He said, “Shen Yun music is based on traditional Chinese music and reinforced by the features of a Western orchestral symphony. It perfectly blends Chinese and Western musical instruments. Not only does it revive [Chinese] tradition, but it also combines with [modern] technology. As this performance approach can resonate with people around the world, the entire world will learn from Shen Yun in the future.”

“Human beings are born with these [genes of traditional culture], but I think we have forgotten them gradually after growing up. After seeing Shen Yun show, I feel like being awakened from what we had forgotten. It’s indeed wonderful,” he added.

‘Gives Us Hope and Power’

South Korean soprano Lee Hyeyeon was amazed by Shen Yun Performing Arts New York Company’s 2015 second performance at Sungsan Art Hall Grand Theater in Changwon City on the afternoon of April 30. She said, “This is a valuable show. It’s another kind of cultural [performance] that we have never seen. It’s an art worth seeing it.”

“It’s a dreamlike performance, and all the programs are spectacular. In particular, the high-tech animated digital backdrops are very mysterious.”

“We often have dreams in our hearts, but we are not sure if they can be realized. But Shen Yun did present a splendid dreamlike performance,” she added.

Lee Hyeyeon was especially impressed with the piece Monkey King and the Skeleton Demon adapted from one of the most famous Chinese classic novels Journey to the West. She said in excitement, “The piece about the Monkey King is truly interesting.”

“Shen Yun’s vocalists are trained rigorously. In this regard, they are really remarkable,” she highly praised Shen Yun’s sopranos.

“They have a very good voice with vitality and vigor to transmit righteous messages,” she said.

Talking about the last program [The Divine Renaissance Begins], she noted, “It gives us hope and power.”

“I feel that Shen Yun conveyed the message of courage of overcoming difficulties,” she said.