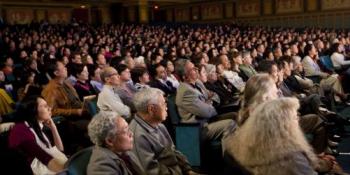 PASADENA, Calif.—Many theater goers found themselves transported to ancient China as they celebrated the first day of the New Year at the Pasadena Civic Auditorium with Divine Performing Arts.

Wendy, a fashion designer, brought her mother Isavella and her two friends, Sonia and Mataji, to experience something special.

“It’s beautiful’, said Wendy, describing them as “soft – the girls themselves were like ribbons.”

She also received inspiration for her fashion styles, saying, “not only fashion wise but it’s so calm the way they describe life.”

Wendy commented on the background screens which projected the scenery. “The way they blended it together was magical for me.”

Isavella, who only speaks Spanish and had her daughter translate said, “gorgeous,” repeating emphatically, “gorgeous!”

“I was impressed with the choreography and costuming,” said Sonia, a dancer, “I like how they integrate the dances with the history.”

She appreciated the show’s hosts who introduced the various performances explaining aspects of Chinese culture, history and the deeper meaning behind the myths.

Mataji, was “swept away with the show,” and was “moved by the lyrics above the singers, I loved their voices, but I was really touched by the words.”

She explained that at this point in her life she identified with the lyrics speaking of transcending the pain of everyday life with more spiritual ideas.

She said that it was the perfect way to begin her new year.