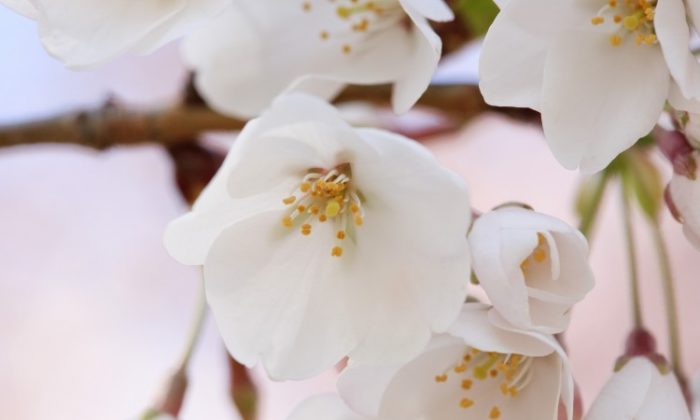 A dancer playing a waist drum in a Shen Yun performance. In order to establish a culture based in communism and atheism, since it took power the Chinese communist party took to destroying China's traditional culture, values and beliefs. (Courtesy of Shen Yun Performing Arts)
Arts & Culture

The Cherry Blossom Festival has begun in Washington D.C., this year marking the 100th anniversary of the Capital’s cherry blossom trees that began as a gift of friendship between Japan and the United States.

The cherry blossom, for many cultures, holds a special significance, symbolizing rebirth, and hope. The beauty of the flower following cold, dark winter months awakens and energizes us for the renewal spring.

It is altogether fitting then that the Shen Yun Performing Arts Company should burst onto the Washington stage during this year’s auspicious Cherry Blossom Festival.

While there will be many events during the six week festival period, Shen Yun offers something special too, and some would say as inspirational as the Festival itself.

“After more than 60 years of communist rule in China, and especially after the Cultural Revolution, traditional culture in China has been all but completely demolished,” says the Shen Yun website. “However, the deeper spiritual core of the ancient culture, with its values of benevolence, honor, propriety, wisdom, and sincerity, as well as a reverence for the gods and the heavens, cannot be destroyed.”

Performers in Shen Yun, largely ethnic Chinese, have come from around the world to join the company. Many of the principal artists from the Mainland left to pursue deeper inner yearnings not allowed to be fulfilled in the communist state.

“It is outside of China that Shen Yun’s artistic creators have the ability to freely express themselves and their ancient culture,” the website says. “Their courage to speak up is an integral part of Shen Yun’s spirit.”

What began as one small group in 2006, has grown to three performance groups, each with a classical Chinese dance company; an orchestra that blends ancient instruments from the East with Western strings, percussion, woodwinds and brass; plus world class solo singers and musicians.

“In a collection of short pieces, audiences are taken on a journey from the heights of the Himalayas to coastal regions; from China’s ancient legends through to the story of Falun Dafa in China today; from the heavenly realms down to the earthly world of the Middle Kingdom.”

The Beauty of Chinese Culture

It is the foundational nature of traditional Chinese culture in the performances that so touches people when they see Shen Yun, particularly for Chinese Mainlanders who are deprived of Shen Yun performances in China.

“I’ve watched so many productions in the Mainland, but none like tonight’s,” said Mr. Song, a Chinese theater director from the mainland after seeing Shen Yun in New York this year. “I feel that every movement in the Shen Yun dances is so soothing, beautiful, and sincere.”

“These are the stuffs of genuine culture from traditional China, and drastically contrasting with performances from Mainland Chinese,” he continued, ” I was truly captivated body and soul,” he said.

Mr. Xiang, who has been published in China and abroad, lived through the Cultural Revolution and was severely persecuted and imprisoned six times from 1959 to 1995 by the communist regime. He lives in the United States under asylum as a writer in residence.

“The poetry is in the lyrics/words, in the dance movements, and the colors,” he said. “This is just a great poem for the entire Chinese civilization.”

“We [Chinese people] cannot even accept our own culture,” said Mr. Xiang. “Why can this show perform in New York in front of the whole world, [but] cannot take the stage in Beijing to the great Chinese population?” he asked.

Ms. Xi, a teacher from China who flew from Hong Kong to Taiwan to see Shen Yun, said that she felt proud when she saw the company.

“With so many talents here, I admire them. Shen Yun really can renew Chinese culture,” she said.

“This [Shen Yun] is indeed what belongs to us Chinese people, and has been missing in China for years,” she said.