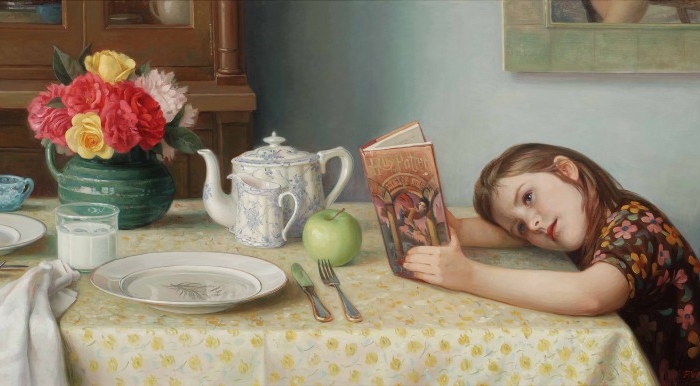 Michael is a jazz and gospel singer in Watwood’s church choir. He has struggled with homelessness and other issues, yet “has a noble soul,” says Watwood in her painting description. The painting is named “Fate,” for “what will his fate be?” (Courtesy of Patricia Watwood)
Arts & Culture

NEW YORK—Patricia Watwood and two other artists came together at the Forbes Galleries, where she currently has  an exhibition through June 9, to espouse the virtues of contemporary classical realist art while searching for clarity about the oft-misunderstood field.

“Our work is not usually ironic, overly self-reflective, morbid, or nihilistic,” she explained. “It’s based in traditional methods, it embraces beauty as an emotional and rhetorical language, it uses naturalistic representation, and it is built on the twin cores of Western art—nature and design.”

Many portraits are featured in Watwood’s exhibition, including her daughter, lost in a Harry Potter novel while waiting for dinner; a female Middle Eastern neighbor, depicting how all cultures are human; and two self-portraits, one done while she was pregnant.

The figures provoke contemplation and evoke sensitivity. A fair number are nudes, painted in a similar fashion to what one might see at the Smithsonian Museum in Washington, D.C., circa the 13th and 14th centuries.

Her highest aspiration is to create artworks that bring a magical and spiritual energy to the viewer.

She said that she and the two other artists “haven’t seen any need to overthrow traditional forms.” “These traditional forms continue to work exactly, perfectly well, to wrestle with this idea about what does it mean to be human, how do we address that in art—that’s what we’re interested in,” she added.

People may have a perception of realism that it is just looking and painting. The process is “actually a complete transformation of looking, thinking, meditating, creating,” Watwood said.

She then read a quote from Sabin Howard’s and her former teacher: “I try to make art which reaffirms to the viewer that there is a value in human life. It should fire the sense that one is not alone, and that one is part of a group with similar needs, longing, hopes, dreams, fears, desires, which transcend time.”

“There is time enough for the things we value: time to craft a painting, to study, to learn, to enjoy, to sit still, and to contemplate a picture and the world it contains,” Peter Trippi, art historian and editor of Fine Art Connoisseur magazine, quoted Watwood in his introduction to the exhibition.

Trippi added, “Beyond their sheer beauty, what excites me the most [about the paintings], is their enveloping stillness.”

Famed portrait artist Nelson Shanks joined the art historian and two artists in the conversation about the both traditional and forward-thinking art form.

Watwood said Shanks believes, “The realist painting must be nothing less than a meditation on the nature of existence and the individual.” “It must create likeness with the power to kindle the observer’s imagination and awaken memories. It must encompass all that the realist painter sees before with his eyes and therefore feels in his heart.”

Through her art, Watwood said she wants to communicate and make people care about the world and the subject in the painting. In her notes, she expressed a desire for her paintings to connect spiritually with both subjects and viewers and also to be “visual poems awaiting your interpretations.”

By today’s standards, all three artists spend an atypical amount of time on their work. Watwood takes between six to eight weeks on her larger pieces; Shanks often begins painting at 6 a.m. and works seven days a week; and Howard spent 45,000 hours on his “monumental piece.”

They do all of the work themselves, without assistants, opposing the modern movement of artists leaving the work to assistants and instead becoming conceptual designers.

As an example, Watwood referenced Damien Hirst’s only interaction with his dot prints being his signature.

Conversely, in line with a return to fascination with the handmade, Trippi said he saw “lots of people who are standing in wonder in front of Patty’s pictures saying ‘how did she make that?'”

“I know someone could conceive of that and mock it up with Photoshop, but that’s not what happened here,” he added. Collectors benefit from purchasing such works, added Trippi. He has seen many “derive great joy” from them.

The conversation moved from the artists’ own motivation to the realm of the art form, contemporary classical realism, and how to continue moving it to the forefront of the art world.

Myths and legends—which many traditional works are based on—provide excellent opportunities to express different ideals about what it means to be a human being, spirituality without being stuck in a certain religion, and the big questions of our time, Watwood said. She and Howard noted the shift back toward heroism in popular culture, several days before “The Avengers” came to the theaters.

“When you do it correctly, it’s so complicated, a painting or a sculpture, that it mimics the rest of the universe because you have this system of hierarchy where all the smaller parts fit correctly into the larger parts,” he said.

“That visual complexity triggers something in you in a visceral way that there’s no way you can stop it. This is a new wave that’s starting to fall and it’s shifting in a way that I really believe is unstoppable,” Howard said.