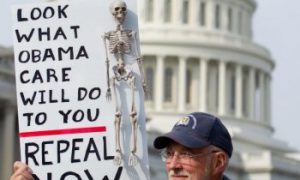 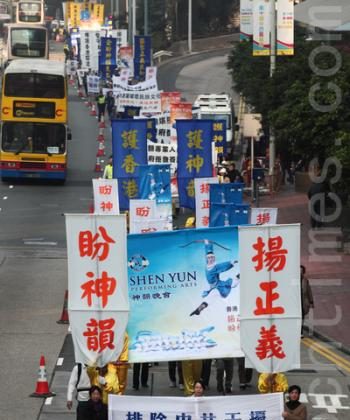 On Jan. 23, organizers representing the Shen Yun Performing Arts Company rallied to protest the Hong Kong government's refusal to issue visas for 6 artists and technical staff members of the company only days before the shows were scheduled to take place. (Zaishu Pan/Epoch Times Staff)
Arts & Culture

The Falun Dafa Association held a rally on Jan. 23 under the title “Uphold Justice and Welcome Shen Yun.” Dignitaries and VIPs spoke in support of Shen Yun.

One year ago, Shen Yun, an internationally acclaimed performing arts company from New York, was scheduled to play at the Hong Kong’s Lyric Theatre from Jan. 27 to 31, 2010. But less than a week before opening night, and with all seven shows sold out, the show was forced to cancel as the Hong Kong Immigration Department refused to give seven members of Shen Yun’s core production team entry visas.

The reason given by the Hong Kong Immigration Department was that these production jobs should be filled locally. According to Shen Yun, the production members are highly specialized; they cannot be replaced, and the show cannot go on without them.

Visas for Shen Yun tour members were applied for on Oct. 13, 2009, but the denial came only three days before the group’s scheduled departure for Hong Kong.

Joseph Cheng, professor of Political Science at City University of Hong Kong, and a representative of the Civic Party, called on the people of Hong Kong to stand up and help stop the Chinese Communist Party (CCP) from interfering with Shen Yun’s performance in Hong Kong.

“If we fail to do so, one day our rights may very well be trampled [by the CCP]. I call on the Hong Kong government to respect [Shen Yun artists’] human rights,” Cheng said.

Bao Tong, former political secretary of the late CCP general secretary Zhao Ziyang, said in a prerecorded tape, “I hope that through this incident, the people of Hong Kong and the rest of the world learn that there is no judicial independence in Hong Kong.”

Albert Ho, chairman of the Hong Kong Democratic Party and a member of the Legislative Council, participated in the rally via a prerecorded video. Ho said he would do everything in his power to support Shen Yun’s hosting organizers and ask for justice through legal means.

“Shen Yun must be given the rights to perform freely, including freedom of expression, freedom of information, and freedom of legally entering the country,” Ho said.