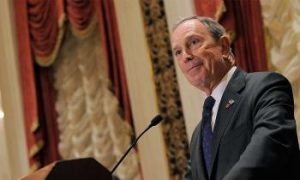 By Ian Ritz
Print
NEW YORK—Pee-wee Herman will be making his way to Broadway with an act that is more than 20 years old, but still popular in American culture. Paul Reubens, the original Pee-wee will be starring in the show as a child-like adult character with talking furniture.

The Pee-Wee Herman Show did a test run at the Nokia Theater last winter in Los Angeles and received favorable results, inspiring those involved to take a chance on The Great White Way in Manhattan. The Broadway segment of upcoming performances will be held at the Stephen Sondheim Theatre. Actor and creator Paul Reubens will be leading the way, sporting his signature bow tie and gray suit, according to Playbill.com.

The show has been described by the creators as "An eye-popping 90 minutes of subversive humor and childlike wonder, The Pee-wee Herman Show charts a day in the life of our bow-tied hero, one of the most inspired comic personas of our time.”

Alex Timbers will be directing the show, which is set to premiere in November. Tickets will be available June 1 at Telecharge.com, but the performances will not begin until November 11.

Reubens started his career as an actor and stand-up comedian in the late 70s after bombing an SNL audition and landing a role in Cheech and Chong’s Next Movie. He found his niche role with Pee-wee Herman, doing stand-up on HBO dressing up in a suit and acting like a little boy.