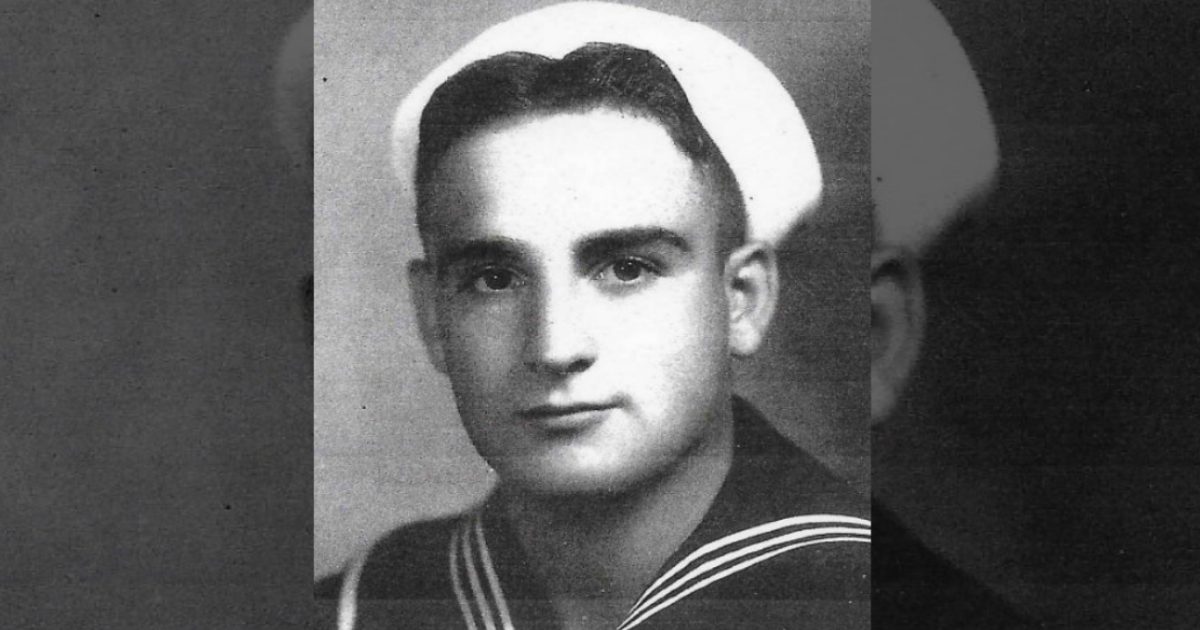 "He just always wondered if he was dead or alive"
BY Kimberly O’Connell TIMESeptember 6, 2018 PRINT

Thomas Clark Jr. had always been interested in his uncle George, a U.S. Navy sailor who died on the USS Oklahoma when Pearl Harbor was bombed. After Clark served in the U.S. Army in 1968 and 1969, his maternal uncle’s fate became a lot more significant because he understood what war was like.

Navy Electrician’s Mate 3rd Class George Harvey Gibson was 20 years old when Pearl Harbor was attacked by Japanese aircraft on December 7, 1941. Multiple torpedo hits caused the USS Oklahoma to capsize in 12 minutes, taking with it 429 sailors and crewmen, including George.

Clark’s mother (George’s sister) was driving when she heard over the radio that Pearl Harbor had been bombed.

“So she chucked out this letter the next day, December 8, saying: ‘George please send me a telegram. Let me know you’re OK. I know the ship was attacked but we don’t know anything. Please, please I’m worried,'” Clark told Humanity in a phone interview.

“The letter was never delivered again, it was sent back.”

The Wilson Long Beach High School graduate was presumed dead. Although his family knew that he had been buried in Honolulu’s National Memorial Cemetery of the Pacific, or “Punchbowl,” his remains were never identified—and that made it difficult for his relatives to move on.

“After exhaustive search it has been found impossible to locate your son, George Harvey Gibson Electrician’s Mate Third Class, US Navy and he has therefore been officially declared to have lost his life in the service of his country as of December seventh nineteen forty one,” the telegram read.

George’s death was especially challenging for his father, Paul Gibson—a World War I veteran and farmer from Winchester, Kansas.

“My grandfather really missed him. He took it really hard,” Dennis Cummings, George’s nephew from Winchester, told the Humanity. Cummings’ grandfather always talked about George to Cummings and his siblings.

Not only was missing his son painful, but the lack of a dignified burial added insult to injury.

“He just always wondered if he was dead or alive,” Cummings said.

After getting drafted into the Army and experiencing war firsthand, Clark said he “wanted to know more about uncle George.”

Besides studying and buying books on Pearl Harbor, he spoke to sailors who had been stationed there, and learned a lot about the battleship USS Oklahoma.

After all these years, Clark has kept everything he could get a hold of on his uncle: photographs, original letters between George and his sister, local newspaper clippings from the 1940s, a wooden stool he built in high school, his Navy uniform, and even a lock of his hair.

“If you study your family and your history, it brings you all together, it gives you a purpose, a camaraderie,” said Clark, now living in Roseville, California.

But when Clark did a Google search on the USS Oklahoma earlier this year, he had no idea it would lead to a bittersweet homecoming that was decades in the making.

“I found out that they started exhuming bodies from the Oklahoma crew—something I never expected,” Clark said.

In June 2015, personnel from the Defense POW/MIA Accounting Agency (DPAA) began exhuming the remains from The National Memorial Cemetery of the Pacific, where George was buried.

A few weeks after sending in a swab from his cheek for DNA testing, Clark got a call from a woman from forensics who had found his uncle George. He was officially accounted for on February 12, 2018.

“I said ‘It’s been 77 years. My mom, my grandma, my grandpa are all passed away and they never, ever, thought this could happen,'” Clark said.

Clark decided to have his uncle’s remains buried in Los Angeles—believing it’s what uncle George and Clark’s mother would have wanted.

“This is home,” Clark said. “And I think George would agree—I know my mom would.”

On July 20, United Airlines flew the remains to LAX, where a monumental event honoring George’s arrival was more than Clark could have ever imagined.

“The mayor of Inglewood, the police, the sheriff’s department, L.A. police, airport police—they put together an ensemble of people in vehicles to take George’s remains off the airplane for me from United Airlines at LAX, and drove him via motor chain to Inglewood Mortuary,” Clark said.

The Los Angeles Fire Department lined the tarmac as the sailor’s casket, draped with an American flag, was carried off the plane. A minister spoke and then the Navy did their procedures.

After folding the flag and giving it to Clark, a motorcade of about 20 police cars and volunteer veterans on motorcycles escorted George’s remains to Inglewood Mortuary, giving him the homecoming he deserved.

“There was hundreds of people watching at the airport, and then the motor chain at night with all the sirens and lights going on in the city,” Clark said. “It was just overwhelming.”

The veteran was buried beside his sister, Mary Eva Gibson, at the Inglewood Park Cemetery with full military honors on Saturday, July 21 at 11 a.m.

George’s homecoming gave his family a great sense of closure and peace.

“I never thought I would ever be in a position where I could bring him home. And all of the sudden within a few days I was able to do it and share it with the family,” Clark said. “This is really a shock.”

Cummings and his wife Martha were present at George’s funeral, representing the family from Winchester.

It was a “sad day but a happy day too knowing that he’s home finally,” an emotional Cummings said. He added that George’s homecoming would have meant a lot to his grandfather (George’s father).

“That’s one thing he always wanted for George was to have the military honors,” Cummings said. “That’s just something that would’ve made it right with the country for his life.”

Cummings was also happy for the opportunity for his children to learn about their great uncle and their history.

“I think they really appreciate this,” Cummings said.

Both men stressed the importance that young Americans know their history and appreciate the sacrifices of the World War II generation.

“They have no clue, where, why, or how they got here. This country took on the role of world leader after the war,” Clark said. “We fought socialism, communism, for our freedom.”

The family is looking forward to a reunion in Gower, Missouri, on August 19, 2018.