Patron of the Arts: Shen Yun Is Obligated to Bring Its Performance to the World 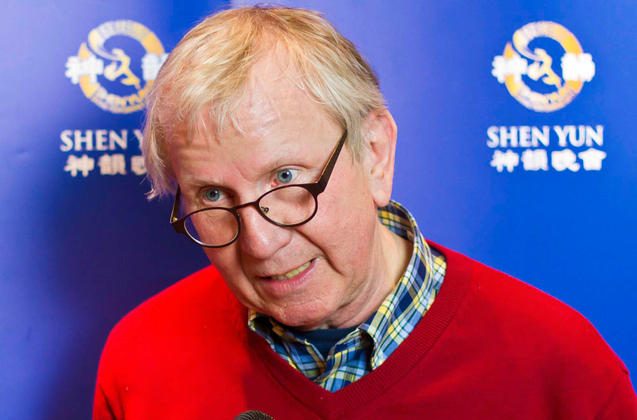 Mr. Boi Wynsch, patron of the arts, came from Denmark for the evening to see Shen Yun. (Christian Nilsson/Epoch Times)

BERLIN—Mr. Boi Wynsch attended the Tuesday night Shen Yun Performing Arts performance at the Stage Theater am Potsdamer Platz, which with 1,800 seat arrangements is one of the largest theaters in Germany. The theater opened its doors in 1999, where the Berlin Wall stood.

Mr. Wynsch of Art Nordic, which runs Scandinavia’s largest art fair, is a patron of the arts and came all the way from Denmark to see the Shen Yun show in Berlin. He will return to Denmark after the show.

He said, “Shen Yun is very important for our country, as well as for other countries. The world can see the Chinese culture and at the same time current events in China.”

“We have seen today a show that touches the heart,” Mr Wynsch said. “There is nothing political in this show. It only tells the world about China today and the culture of China spanning 5,000 years.

“Culture can’t be suppressed … It is not a question if Shen Yun wants to present the performance to the world, but that they have to bring it to the world. They are obligated to do so.”

According to the Shen Yun website: “Over its past 60 years of rule, the communist regime has treated traditional Chinese values—centered on the idea of harmony between heaven and earth—as a threat to its existence. And in its systematic campaigns like the Cultural Revolution, it has uprooted traditional beliefs and destroyed ancient treasures—bringing traditional 5,000 years of civilization to the brink of extinction.”

“What we have seen today is an unbelievably strong message calling for freedom,” Mr Wynsch said.

“I think Shen Yun stands for hope. Or stated more clearly, it does not stand for hope because everything will come naturally. Shen Yun has to be shown more and more and more people will understand its message.

“Whoever hears today the news about the Shen Yun should, must go and see it. It is a different way to learn about China. It is tasteful, totally respectful and not in a fixed form or format. We are proud that we could attend this show today here in Berlin.

“Tomorrow, I will be back at work and tell everyone about this show.

“Shen Yun is a magnificent performance and I hope that Shen Yun will be shown in Denmark soon. I can only say repeatedly that the show was wonderful.”