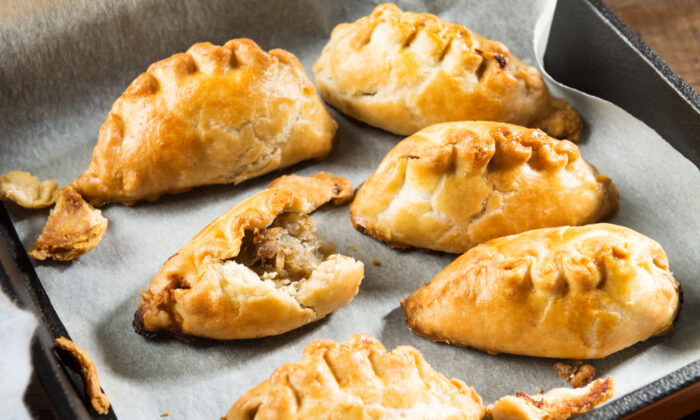 Pasties, Porketta, and Potica: Culinary Gems of the Iron Range

Emma Buls
Emma Buls is a writer, avid cook, wine lover, and travel enthusiast currently based in Duluth, Minn., but who recently lived in San Francisco and New York. She and her husband documented their 18-month long journey through Europe, Australia, and Southeast Asia on her travel blog GrandTouroftheMiddlingSort.com
View profile
Follow
biggersmaller
Print

In northeastern Minnesota, dotting a landscape called the Iron Range, there are cities with names such as Hibbing, Virginia, Chisholm, Nashwauk, and Eveleth, and in these cities are bakeries, delis, bars, restaurants, and church fundraisers that sell delicious things beginning with the letter “p.” Delicious things that have been part of the region’s identity since iron ore was discovered here in the late 1880s, and waves of immigrants—Cornish, Italians, and Slovenes to name a few—answered the call to work in the mines. With them came hope, desire, expectation.

Specifically, food that begins with ‘p’: pasties, porketta, and potica.

The Iron Range isn’t a mountain chain, but a 175-mile series of iron ore outcrops, from which iron was mined to produce steel that built the nation’s skyscrapers, bridges, and military equipment in both World Wars. Although many of the mines have closed, the heart of the mining industry still beats, and Minnesota remains the country’s largest producer of iron ore and taconite.

The “three p’s” of the Iron Range form a culinary trinity, begun by those early miners, that few outside this part of Minnesota know about. My husband and I set out on an alliterative culinary journey to “The Range” to find out more.

We began in Hibbing, a 75-mile drive northeast from our home in Duluth. We stopped at the cheerful Sunrise Bakery, run by Hannah Forti and her baker husband Paul, whose great-grandfather Giulio emigrated from Italy to the Range and founded Sunrise in 1913, baking Italian bread for the miners. Today, Paul and his team make all of the goods Sunrise sells (retail and wholesale) at the production facility away from the storefront, including their famous bread; pasties, the half-moon shaped savory pie of meat, potatoes, and vegetables with a signature crimp for holding; and potica (paw-TEE-tzah), the Slovenian sweet bread stuffed with walnuts or sometimes poppy seeds.

“Pasties are relatively easy to make,” Hannah told me as we sat down for a chat in the café part of the business. Introduced to the Range via Cornish miners, the pasty’s popularity spread once immigrant arrivals from other countries got wind of its affordable, portable (they fit in a miner’s pocket), and durable nature, and requested their wives make it for them. Decades of community and collaboration have made it a Range staple.

Hannah didn’t have any pasties ready to show me, but she brought me over to the tall shelves near the front door where she handed me an oblong box of Sunrise’s walnut potica, which was surprisingly heavy. Unlike the pasty, “there’s a real skill to making potica,” she warned me. “You can’t really just pick it up.”

The dessert is made with leavened dough that is pulled and stretched on a table into a thin sheet by at least two people (traditionally the women of the family), then stuffed with ground walnuts, sugar, honey, and butter, and rolled into a loaf to be baked and sliced. Brought over by Slovenian immigrants, potica, like the pasty, transcended ethnic and linguistic lines to become a Range tradition at weddings, during holidays, and for dessert, paired with a cup of black coffee (“coffee black” in these parts). The Italian Fortis make their version from a recipe brought to the bakery by Paul’s aunt Virginia, after Eleanor Roosevelt’s visit to the Range in the late 1950s. Eleanor loved the potica she tasted, it’s said, and Virginia was determined to have Sunrise make its own.

I asked Hannah about porketta, and without skipping a beat, she directed me to Sunrise Deli, the first deli established in Hibbing, a few blocks down the street from Sunrise Bakery. The deli is run by two other members of the Forti family, Tom and Mary, in the old Lybba Theater, named after Hibbing native Bob Dylan’s grandmother. The building still bears the old marquee.

Mary was behind the counter working a slicer when I walked in. She met me at the freezer where the deli keeps porketta and other Range foods, such as sarma (Slovenian cabbage rolls) and South Americans (a sort of spicy sloppy Joe made with ground pepperoni and jalapeño peppers).

Unlike traditional Italian porchetta, which is made from a boned whole pig (or, in smaller versions, just the pork belly), stuffed and slow-roasted until the meat falls off the bone, Range porketta is made from a cheaper boned cut of meat, such as pork butt or shoulder, as Italian immigrants adapted their recipes to ingredient availability and the limits of a miner’s wage. The meat is heavily seasoned with a rub of fennel seeds and fronds, garlic (minced and powdered, but granulated garlic is common these days), salt, pepper, and a little oil; rolled up and tied; and refrigerated overnight to let the seasoning do its magic before roasting the following day. Since it’s essentially a preserved meat, porketta holds up well and can last for up to a week, served as a roast or sliced for sandwich meat, for a miner’s lunch pail or at picnics.

The following day, my husband and I went to nearby Virginia, Minnesota, and met the friendly Bette Prebonich and her daughter Laura Collins, who helm the bright and airy Pep’s Bake Shop. Laura is the head baker for both Pep’s and nearby The Italian Bakery, which they also own, while Bette runs the books. At the L-shaped luncheonette counter occupying a quarter of the storefront space, I sipped a coffee and ate a little pastry called an apple nest. Laura presented an unbaked beef and vegetable pasty about the size of my head—huge compared to the hand-sized pasties I remember eating as a child growing up in Australia.

“Thursday is pasty day,” Laura said, “and we do beef, Italian sausage, and vegetable. No rutabaga.” Laura’s sneer made clear that she is not a fan of rutabaga, an earthy and more bitter version of the potato, said to have been introduced into the pasty by the Finns, who used it in place of potatoes and sometimes carrots. Bette, of Finnish descent, thinks the pasty misses something without it.

I noticed on the wall a small chalkboard listing Pep’s daily menu, including a porketta sandwich as an item on offer. But both Bette and Laura wanted to talk about potica, a word that produced gasps of reverence and boasts of pride when I inquired about it.

Part of this reaction might have been because making potica is so labor-intensive. Laura mimed how she goes about pulling the potica dough, leaning over an imaginary table, slashing her arms upward, across from at least one other person doing the same thing. “It’s an all-day thing,” Bette said, smiling.

I watched people from the outside continue to file into Pep’s, not just to buy apple nests, potica, and porketta sandwiches, but to stay a while, to sip a coffee while catching up on the local gossip inside the bakery’s warm walls.

On the way back to our home in Duluth, we stopped in Chisholm to pick up a porketta from Jubilee Foods based on a recommendation from a friendly tavern owner in Hibbing. The scent of garlic and fennel permeated through the packaging and danced throughout the car, making me salivate at the promise of roasted savory slices atop a crusty roll with a little mustard and a slice of cheese.

Amid the reverie, I pondered how the “three p’s” don’t exist outside the American culinary fabric, but are firmly part of it. They form patchworks of cooking traditions in mining communities in northern Minnesota, Michigan’s Upper Peninsula, Northern Wisconsin, Pennsylvania, Montana, and towns small and large in between. Here, even if the origins of the food may be largely forgotten, the making and eating of it live on.

Emma Buls
Follow
Emma Buls is a writer, avid cook, wine lover, and travel enthusiast currently based in Duluth, Minn., but who recently lived in San Francisco and New York. She and her husband documented their 18-month long journey through Europe, Australia, and Southeast Asia on her travel blog GrandTouroftheMiddlingSort.com