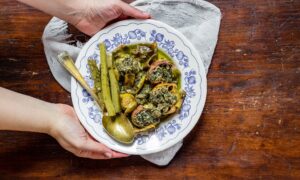 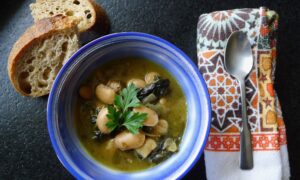 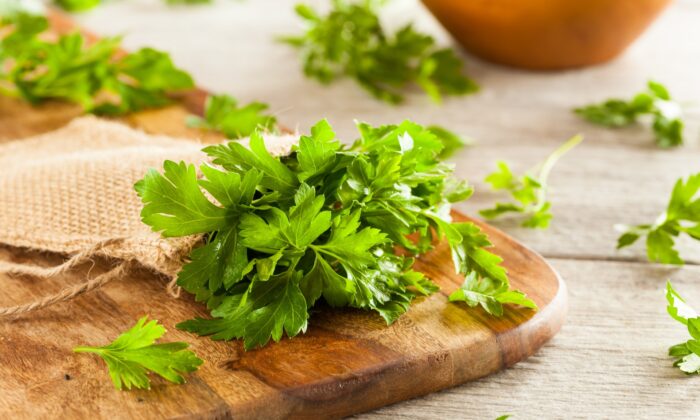 Parsley is the unsung hero of the kitchen. (Courtesy of Cider Mill Press)
Recipes

The humble herb is a kitchen powerhouse. Let it shine in this zesty, chimichurri-inspired sauce
By Laura Sorkin
Print

Parsley is the unsung hero of the kitchen. Tasted on its own, it has a generic “herbal” flavor, but I have never been in a commercial kitchen that didn’t use it liberally in everything from stock to salads because of its magical ability to make anything it touches taste better.

There are a few dishes that feature parsley as the core element, such as tabbouleh, and many variations of parsley-based sauces. Brazil, Argentina, France, Italy, and Afghanistan all have their own versions of a parsley sauce that can turn a simple steak or pastry into a regional specialty. So it’s about time this hero got some praise.

Parsley is thought to come from the Mediterranean region and has figured in the area’s history in both sinister and uplifting ways. The botanical name Petroselinum comes from the Greek word for stone, informed by the fact that the plant grows well in rocky areas. The Greeks made wreaths for graves with it and considered it a symbol of death. The Romans didn’t cook with it either, but used it for covering up putrid smells and bad breath. Between the two cultures, it had some unpleasant associations.

Jewish communities took a more favorable view of parsley, seeing it as a symbol of spring and using it in Passover celebrations. And both Charlemagne and Catherine de Medici were champions of it, giving the herb a rebirth of respectability.

Americans know parsley mostly as a garnish, but in Middle Eastern food it is given more prominence. The traditional Lebanese dish of tabbouleh is often seen in the States as a bulgur wheat salad with some parsley and mint tossed in, but the traditional preparation leans heavily on the parsley with the bulgur as backup. The result is an herbaceous, emerald-green salad that is a perfect accompaniment to hummus, grilled veggies, or labneh cheese.

Perhaps the most underutilized purpose for parsley is as a sauce. Basil pesto has hoarded all of the attention for herb-based sauces for a few decades, but I think it is time to show off parsley’s attributes as an all-purpose condiment.

Chimichurri, the Argentinian sauce of parsley, vinegar, garlic, oregano, and red pepper, is among the most well-known. The French make a similar sauce, called persillade, with parsley and garlic, and the Italians have salsa verde, which is parsley, capers, anchovies, and garlic. The Italians also make gremolata, parsley, garlic, and lemon, to go over traditional osso buco. In Afghanistan, they make a parsley-centric sauce to go with savory pastries called bolani.

The parsley sauce I make is a variation of all of these, depending on what other herbs are looking good at the time and what I’m planning on making for dinner. I started making chimichurri years ago to go with grilled steak, but found it was even better on sautéed potatoes. Since then, the chimichurri has morphed into a malleable sauce that goes with anything. If I’m serving chicken, I might add lemon and rosemary. If the entrée is grilled pork, I may steer toward cilantro and extra garlic.

The additions vary, but every batch of chimichurri starts with a base of at least one full cup of large-leaf parsley, and there is never any left over because we slather it over everything. I have also found that while a basil pesto can go wrong in 10 different ways, the parsley sauce always tastes good, no matter what I put in it.

I could have called this “salsa verde,” or any of the names given to parsley-based sauces, but “chimichurri” sounds the best. The one variable is the herb other than parsley. I listed rosemary, but you can use cilantro, basil, thyme, dill, or any combination. Thyme, rosemary, and oregano have strong flavors, so use them sparingly, but basil, cilantro, and dill can be tossed in liberally. Use this on anything: grilled steak, steamed corn, roasted potatoes, rice—the list is endless.

Place all of the ingredients, except for the oil, in a food processor and puree until it nearly smooth, scraping down the work bowl as needed.

With the food processor running, slowly add the oil and puree until emulsified.

If not using immediately, refrigerate and allow it to come to room temperature before serving.

Excerpted with permission from “Vegetables: The Ultimate Cookbook” by Laura Sorkin, published by Cider Mill Press.