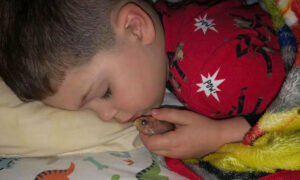 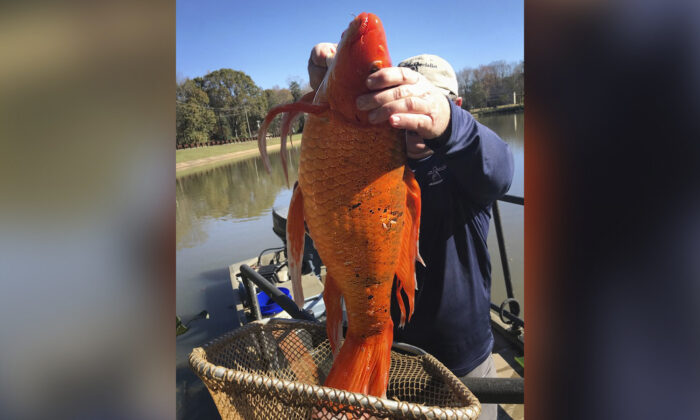 During a routine water quality check on Oak Grove Lake, South Carolina, parks and recreation surveyors were astonished to pull a 9-pound (approx. 4-kilogram) goldfish from the water.

According to Ty Houck, director of Greenways, Natural and Historic Resources for the Greenville County Recreation District, the fish was roughly 15 inches long, an unusual discovery that’s promising for the health of the lake.

“Anyone missing their goldfish?” Greenville Rec posted on Facebook the Monday following the discovery.

They were only half joking, as it isn’t unheard of for pets to turn into monster goldfish after making their way into a lake.

“We think someone must have just dropped their fish in the lake because they didn’t want it anymore, instead of flushing it down the toilet,” Houck told CNN.

He added that catching the fish was a total fluke. As they were testing the lake water, the huge goldfish leaped right into their net without warning. If it hadn’t, they might never have known it was there.

The fish appeared while the crew was testing the water using electrofishing, a method that sends gentle shock waves through the water. The shock waves don’t hurt the fish but instead force them to float to the surface so workers can gauge the health of fish populations.

“All of a sudden this giant fish jumped out and into the net and we quickly snapped a photo while examining it,” Houck said.

According to National Geographic, the average size of a wild goldfish is 4.7 to 16.1 inches. The parks and rec crew’s catch lands squarely on the larger side of the scale.

After measuring what Houck called “the Methuselah for Oak Grove Lake,” the crew threw the fish back into the water. The lake is used mainly for fishing, and parks and recreation encourages fishermen to throw fish back, as well.

Houck pointed out that the goldfish’s size bodes well for the health of Oak Grove Lake.

“Goldfish grow to the size of their environment. To have a 9-pound goldfish survive in our lake must mean we are doing something right,” he said.