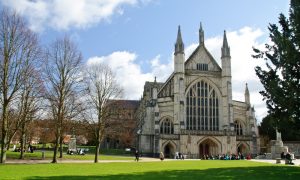 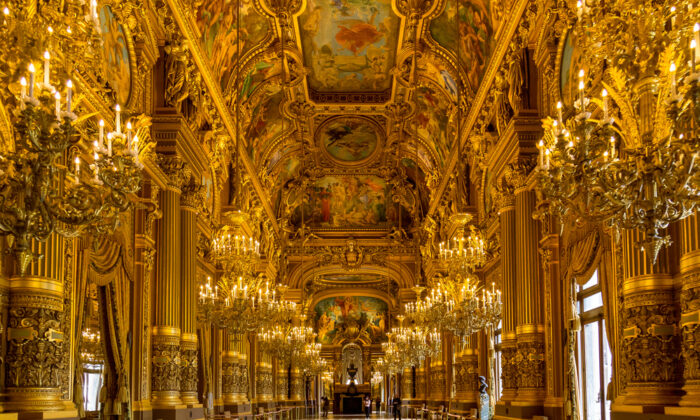 The spectacular Grand Foyer was intended as place to meet and mingle. (Gilmanshin/Shutterstock)
Fine Arts & Craftsmanship

Larger than life: Art that inspires us through the ages
By Epoch Times Staff
biggersmaller
Print

The Palais Garnier’s façade acts as a stupendous billboard for the streets of Paris. Its marble friezes, columns, and statues introduce and pay homage to the arts.

Ancient Greek figures such as Apollo and Pegasus are cast in bronze; Harmony and Poetry are also in bronze but gilded. Allegorical sculptures of Painting, Sculpture, Industry, and Architecture are seen in low relief; and different categories of music and theater, also allegorically depicted, are seen in high relief. And many astounding personalities in the arts are also featured, composers such as Mozart and librettists such as Eugène Scribe.

The sumptuous interior is both highly decorative and functional. For instance, a grand white marble staircase with a red and green marble balustrade leads audience members up to a grand foyer with a 59-foot-high painted ceiling featuring the history of music. And alcoves and landings allow audience members to easily socialize.

Charles Garnier designed the Palais Garnier for the Paris Opera between 1861 and 1875 at the request of Napoleon’s grandson, Napoleon III.

Garnier chose the eclectic style of architecture—the Napoleon III style—that flourished under the emperor’s reign. The style combines elements of historical architecture while incorporating new innovations. Garnier incorporated Baroque, Palladian, and French Renaissance architecture into the Palais Garnier along with the modern invention of iron framework.

The Napoleon III style influenced 19th-century European and American decoration and architecture. The Palais Garnier, as the epitome of Napoleon III architecture, directly inspired many buildings, including the Thomas Jefferson Building in Washington.