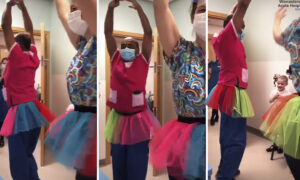 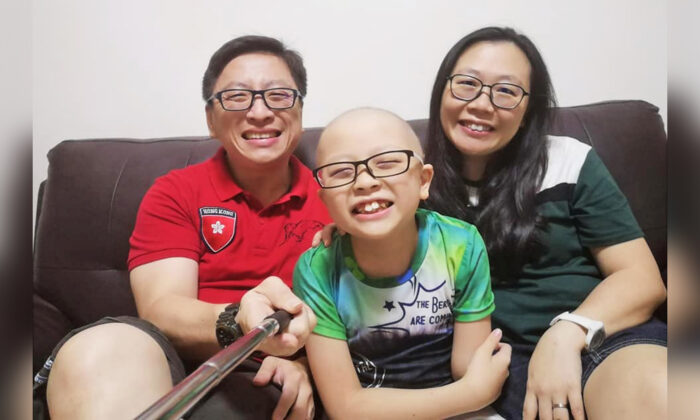 Parents of Boy, 12, Who Died of Rare Cancer Say, ‘Time Spent Together Is More Valuable’

When a 12-year-old boy battling cancer died before fulfilling his ambition of getting his Primary School Leaving Examination (PSLE) results, his parents decided to share their message of spending quality time with children.

William and Winnie Lee’s late son, Raphael, had Li-Fraumeni syndrome, a rare genetic condition that predisposed him to various types of cancer. Raphael wanted to sit for his PSLE at Alexandra Primary School, Singapore, before surgery on Nov. 12, 2020.

Tragically, he passed away from complications after the procedure, and before he could collect his exam results.

William, 47, and his wife, Winnie, 45, from Singapore, collected their son’s results on his behalf. Raphael had scored A grades in math and science and B grades in English and his native language exam.

“Math and science were his favorite subjects in school, and he enjoyed challenging himself with mind-boggling math problems in his free time,” Winnie told The Straits Times.

In 2008, Raphael had developed a rare soft-tissue cancer, called rhabdomyosarcoma, which was eradicated through chemotherapy, radiotherapy, and surgery.

After a brief remission, the condition resurfaced in 2016, reported The Straits Times. Raphael was then confirmed to have bone cancer or osteosarcoma and had a forearm amputated; he was in Primary 2 that year.

In 2019, doctors discovered a tumor in Raphael’s right collarbone. Surgery removed the tumor, but cancer had already spread to his lungs.

Winnie said Raphael seemed to know he was going to die. He wanted his body donated to scientific research.

Brave Raphael’s fighting spirit touched so many that KK Women’s and Children’s Hospital even awarded him their 2020 Inspirational Patient and Caregiver Award.

Yet nearing surgery, Raphael was almost too weak to walk to his classroom on the seventh floor at school, reported Today Online. His teachers offered him a chaperone, but young Raphael declined, not wanting to burden others.

Raphael asked his mom to take him to school early instead, giving him time to walk at his own pace.

“He was telling me not to trouble the teachers because they already have their own responsibilities,” Winnie told Today Online.

Raphael is remembered as an active, attentive child. He loved online gaming, Lego, and robotics; his last gift to his parents was a Lego model of their family. He hoped, one day, to build himself a robotic arm.

Recalling the time before his surgery on Nov. 12, 2020, Winnie said: “Just as he was being sedated to begin the operation, he was telling me, ‘Mommy, I don’t want to lie down … I want you to hug me.’”

“So that was how he went into deep sleep, and that was the last time we saw him, alert and awake,” she told The Straits Times.

Despite their deep loss, the Lees find comfort in knowing their son departed peacefully; biopsy results received after his passing revealed that his cancer had metastasized.

Thousands of mourners attended the livestream of Raphael’s funeral. A family friend from the Church of St. Bernadette, 50-year-old Amy Tong, said that her son, also 12, “just wants to pretend that [Raphael] recovered and God rewarded him with a stay in Heaven.”

Offering their advice to other parents, the Lees told Today Online, “Do spare a thought for [your child’s] social and emotional needs. Be generous and sincere with your compliments, as these are adrenaline that will push them forward.”

“Do not show your fear in front of your child,” they said, “for he or she is clinging onto you for support.”

“Academic results may be important for better prospects in career development,” the couple said. “[But] what is more valuable is the time spent together with your children, especially in their growing-up years.”

“[D]eep down inside us, he has already passed his test of life with distinction and flying colors. We are simply proud of him.”