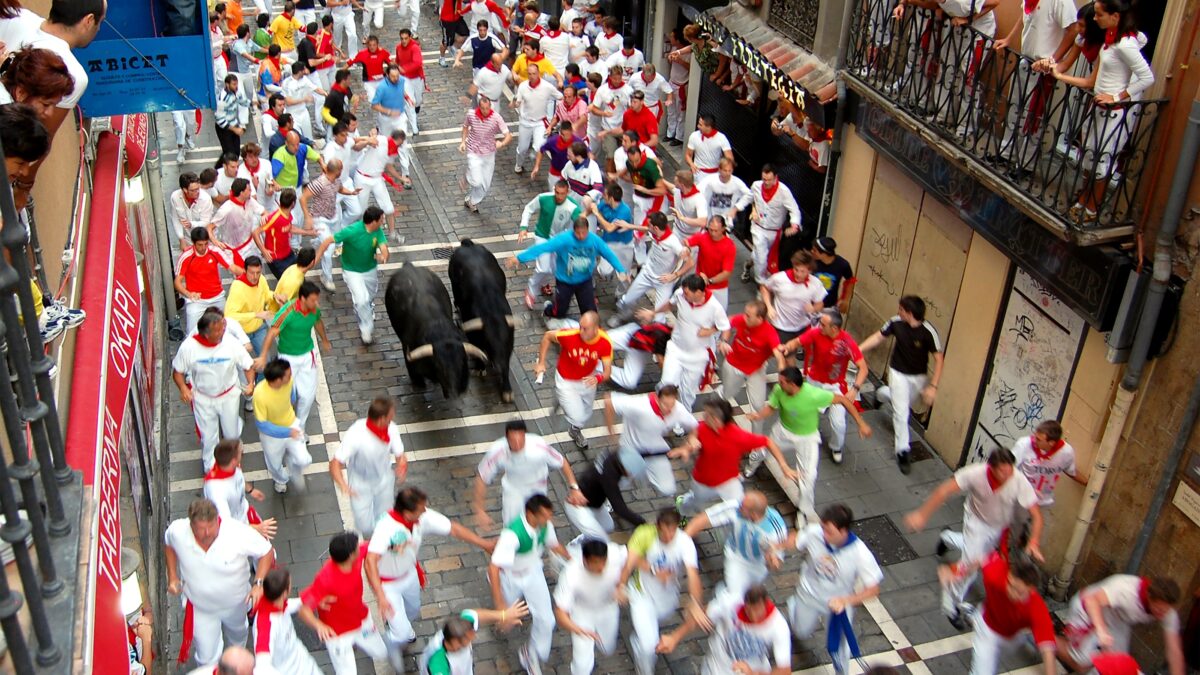 Pamplona: Feeling the Breath of the Bull on Your Pants

Like a cowboy at a rodeo, I sit atop my spot on the fence. A loudspeaker declares — first in Spanish, then in English — “Do not touch the wounded. That is the responsibility of health personnel.” A line of fluorescent-green-vested police sweeps down the street, clearing away drunks and anyone not fit to run. Then the cleaning crew and their street-scrubbing truck make one last pass, gathering garbage and clearing broken glass. The street — just an hour ago filled with throngs of all-night revelers — is now pristine, sanitized for a televised spectacle. It’s the annual Running of the Bulls in Pamplona, Spain.

Perched on the top timber of the inner of two fences (in the prime area reserved for press), I wait for the 8:00 rocket. Cameras are everywhere — on remote-controlled robotic arms, vice-gripped to windowsills, hovering overhead on cranes, and in the hands of nearly every spectator that makes up the wall of bodies pressed against the thick timber fence behind me.

The street fills with runners. While you can wear anything, nearly everyone is wearing the traditional white pants, white shirt, and red bandana. The scene evokes some kind of cultish clan and a ritual sacrifice. This is the Festival of San Fermín. Fermín was beheaded by the Romans 2,000 years ago, martyred for his faith. The red bandanas evoke his bloody end.

It’s three minutes to eight, and the energy surges. The street is so full that if everyone suddenly ran, you’d think they’d simply trip over each other and all stack up, waiting to be minced by angry bulls. The energy continues to build. There are frat-boy runners — courage stoked by booze and by the girls they’re determined to impress. And there are serious mozos — famous locally for their runs, who’ve made this scene annually for as long as people can remember. They’ve surveyed the photos and stats (printed in yesterday’s paper) of the six bulls about to be turned loose. They know the quirks of the bulls and have chosen their favorite stretch of the half-mile run. While others are hung over, these mozos got a good, solid night’s sleep, and are now stretching and prepping mentally.

For serious runners, this is like surfing: You hope to catch a good wave and ride it. A good run lasts only 15 or 20 seconds. You know you’re really running with the bull when you feel its breath on your pants.

Mozos respect the bull. It represents power, life, and the great wild. Hemingway, who first came to the festival in 1923, understood. He wrote that he enjoyed watching two wild animals run together — one on two legs, the other on four.

It’s 8:00 and the sound of the rocket indicates that the bulls are running. The entire scramble takes about two and a half minutes. The adrenaline surges in the crowded street. Everyone wants to run — but not too early. Suddenly, it’s as if I’m standing before hundreds of red-and-white human pogo sticks. The sea of people spontaneously begins jumping up and down — trying to see the rampaging bulls to time their flight.

We’ve chosen to be near the end of the run — 200 yards from the arena, where, later today, these bulls will meet their matador. One advantage of a spot near the end is that the bulls should be more spread out, so we can see six go by individually rather than as a herd.

The bulls rush through, creating pandemonium — a freak wave of humanity pummels the barrier. Panicky boys — no longer macho men — press against my stretch of fence. It’s a red-and-white cauldron of desperation: big eyes, scrambling bodies, the ground quaking, someone oozing under the bottom rail.

Then, suddenly, the bulls are gone. People pick themselves up, and it’s over. Boarded-up shops reopen, and the timber fences are taken down and stacked. As is the ritual, participants drop into a bar immediately after the running, have breakfast, and together watch the rerun of the entire spectacle on TV — all 131 seconds of it.

While only 16 runners have been killed by bulls over the last century, each year, dozens of people are gored, trampled, or otherwise injured during the event. A mozo who falls knows to stay down — it’s better to be trampled by six bulls than to be gored by one.

After the last bulls run, the rollicking festival concludes at midnight on July 14. Pamplona’s townspeople congregate in front of City Hall, light candles, and sing their sad song, “Pobre de Mí”: “Poor me, the Fiesta de San Fermín has ended.” They tuck away their red bandanas…until next year on July 6.