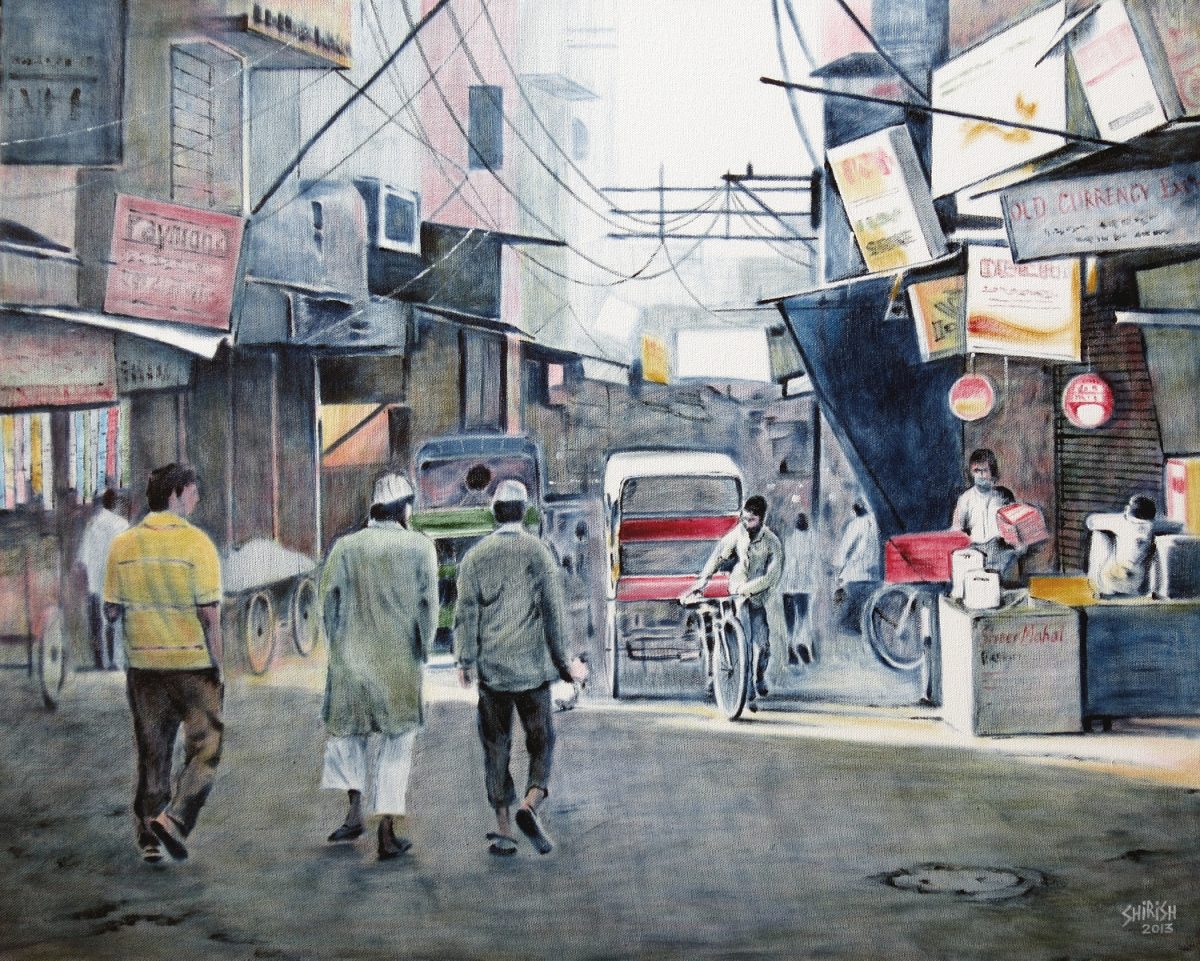 A painting from the series 'A Walk through the Old Delhi Streets' currently exhibited in a gallery in Bangalore city. (Courtesy Artist - Sirish Deshpande)
Arts & Culture

Old Delhi is one of the most populated and oldest historical cities of India, thriving with people, manned cycle-cabs, and dangling electrical wires—yet inspiring artists in its own unique way.

Recently, an Indian artist created a painting-series inspired on old Delhi’s lifestyle and historic significance; the painting collection is currently being exhibited in Bangalore.

“Those electrical wires and early morning shadows divide the spaces so beautifully,” said Shirish Deshpande, whose series of 10 paintings are exhibited in Bangalore’s Karnataka Chitrakala Parishath.

Deshpande participated in an art camp at Delhi in March this year, where they were required to draw inspired by the city. “Delhi has many historical monuments and heritage structures, but when I saw the old Delhi area on the internet, I felt very inspired by its extremities and variegates of life,” he said.

Old Delhi area, which acted as the seat of the Mughal power, boasts of historical monuments like Red Fort and Jama Mashjid. The majestic Red Fort is a historic witness to independent India’s first flag hoisting held on August 15, 1947. As a tradition, every year since then, the country marks its freedom celebrations from the iconic fort.

Around the Red Fort lies the densely populated city of old Delhi, with narrow lanes traversing like a mesh, and hosting many markets and eateries throughout. Homes sit atop markets on both sides of the narrow lanes.

Deshpande said that he usually explored the Red Fort area early in the morning till afternoon every day on foot or via rickshaws, while capturing the scenic century-old-beauty in his camera along his way. Later he started to draw from the photographs in his studio.

“Rest of the day one cannot find these streets empty. The entire place is very alive, with people seen lying on the streets at 7 o’clock in the morning. I absorbed a lot of thought and started to put it on canvas,” he said.

The artist, who originally hails from the south Indian city of Belgaum, was astonished to see how New Delhi has changed being the capital of India, but old Delhi still remains as it was many decades ago. “The way people walk in Old Delhi, they seem to be coming from nowhere and going nowhere,” he said.

Inspired by the city’s architecture and lifestyle, Deshpande thinks that several old electrical wires dangling from poles and city-rickshaws are the priceless “signature element” of the area. “All the seats of cycle rickshaws are red in color. I found only one green throughout,” he said while explaining the minute details he had observed.

Deshpande’s paintings titled “A Walk through the Old Delhi Streets,” fully exhibit the early morning attitude of old Delhi—bringing out the unseen shades of life from this historical Indian city.

Venus Upadhayaya
Reporter
Follow
Venus Upadhayaya reports on wide range of issues. Her area of expertise is in Indian and South Asian geopolitics. She has reported from the very volatile India-Pakistan border and has contributed to mainstream print media in India for about a decade. Community media, sustainable development, and leadership remain her key areas of interest.
SHARE
Friends Read FreeCopyFacebookTweet
You May Also Like