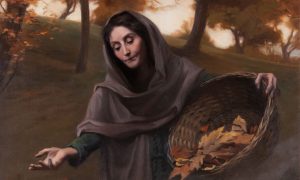 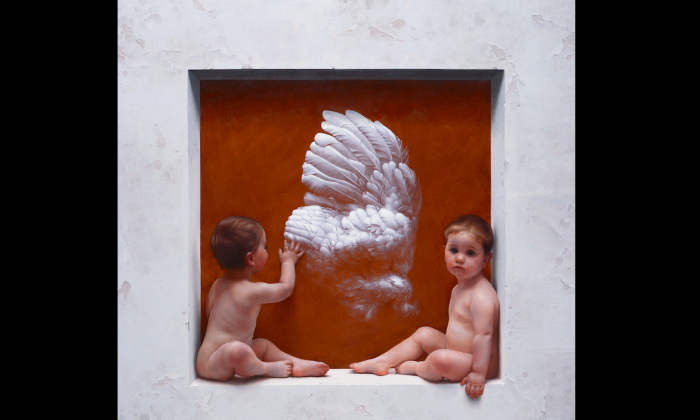 French-born painter Marina Dieul remembers spending more time painting and drawing than playing with other children. Her family encouraged her and she enrolled at l’Ecole des Beaux-Arts in France.

Unfortunately, as this academy was focusing on conceptualism, Dieul had no choice but to teach herself, year after year, by copying old masters. Only recently, in 2008 and 2010, did she study at Studio Escalier in France with Tim Stotz and Michelle Tully, two former students of famous realist painter Ted Seth Jacobs.

Dieul’s work takes us into another world, one of fresh colors and balanced design, sometimes touching, sometimes funny, but always full of life.

Trompe-l’oeil elements are often part of the compositions. Dieul describes her relationship with the trompe-l’oeil genre as a love story that began since her first commission during her early twenties. “What I particularly like about le trompe l’oeil is that people don’t notice at first that there’s a painting in the room,” she said, rejoicing in one instance where a viewer thought that her painting was falling out of its frame, when it was just painted to be so. “Honestly, I can’t think of a better compliment!” she added.

The high-spirited Française describes herself as “never bored, extremely creative and productive.”

“Generally, inspiration comes to me directly in images,” she said. “But sometimes my ideas need time to take shape. ‘For La Grande Aile’ (‘The Grand Wing’), it took me more than two years to gather all the elements and organize the composition. My model wasn’t even born when I first envisioned this painting!”

“Inspiration can come from a vision that appears in my mind, from a color harmony seen somewhere or a great composition discovered in a museum.” Or even her own work, for that matter, “I regularly paint by series, with one work leading to another.”

What Dieul likes most about painting is the act of creating itself, “At first, there is nothing, then—ta-da—there is something!”

“The joy of being able to give life to beautiful creations is immense, and I guess it shows too,” she said.