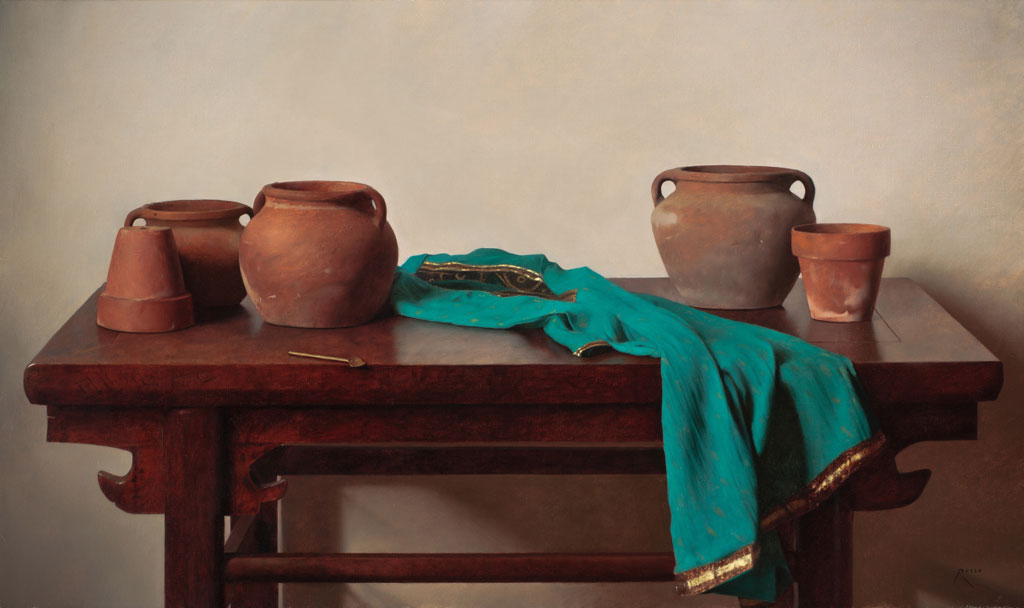 Though Carlo Russo (born 1976) had been fond of drawing and painting since his early childhood, the idea of ever making a living out of it never really occurred to him.

“I was probably in my twenties, I was going to school for fashion design. At one point, a girl I worked with told me that her boyfriend was a painter.”

That conversation led Russo to consider a different career.

“By the time I got out of fashion school, I’d already toured the Pennsylvania Academy of Fine Arts, and the decision had been made,” he said.

Characteristic of Russo’s work is that it portrays the kind of honesty and respect in the way objects are rendered that is quite reminiscent of the Old Masters, while his color palette and arrangements are distinctly contemporary and fresh.

A great influence to Russo was the Chilean painter Claudio Bravo (1936–2011).

“He would elevate very common things like shopping bags, and factory-produced items that weren’t particularly artful in themselves and turn them into fine art,” Russo explains. “That was a revelation for me.”

He spoke of his fascination with Old Masters’ various ways of applying paint:

“They did everything, from thin transparent passages, scumbles, palette knife, thick impastos. … They didn’t just create an impression of the material—they would create the material. I remember seeing a few paintings in particular where what they did with paint was so much more advanced compared to how many painters are painting today, in terms of using the medium.”

Russo shared what he likes most about painting: “It’s interesting to know that someone will own it one day and it’s going to bring them some kind of enjoyment, a sense of admiration. Also, there’s nobody telling me what I have to paint … they try, but I’ve always followed my own path.”

“I’ve always thought of my work as calm and peaceful, it’s not ostentatious. If people were to say, after I was gone, that I was able to provide some beauty, calm, and peace in a chaotic world, I think that would be a pretty good outcome for me,” he said.