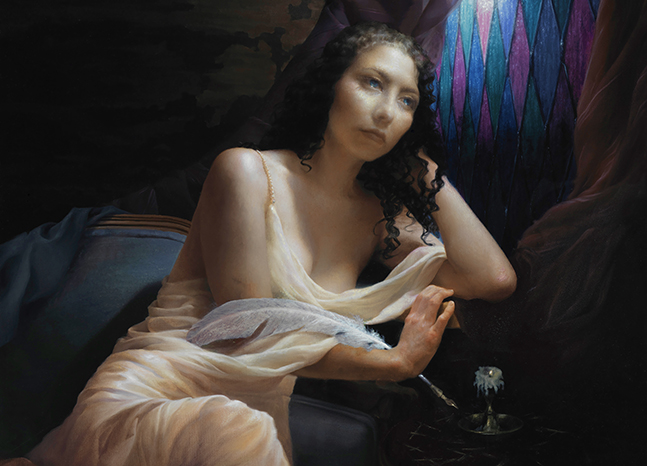 Tarrytown, the home of painter Camie Salaz, lies about 20 miles north of New York on the Hudson River, where the great landscape painters Frederic Edwin Church, Albert Bierstadt, and Sanford Robinson Gifford worked, as did famous philosophers Emerson and Thoreau.

“I knew I wanted to be a professional artist from an early age,” Salaz said. She enrolled at Cornish College of the Arts but during the last two years of her study, a nationwide change in curriculum put an end to recognizing life drawing and painting as a core part of an artists training. It took its toll.

“After college, I felt a little lost for a while. My technical ability wasn’t quite what I wanted, and I didn’t feel I was part of an artists’ community.”

Salaz moved to New York to study at Jacob Collins’s Water Street Atelier. “I’ll never forget what it was like walking in there, seeing all the students so focused and intent, at all hours of the day. It felt like coming home.”

Yet art is more than technique alone, and Salaz shares her admiration for the masters who knew how to imbue life to the figures they painted.

She vividly remembers taking a trip to the New York Metropolitan museum at age 19 and seeing Jules Bastien-Lepage’s “Joan of Arc” in life for the first time.

“Like many people who have seen this painting, I was stopped in my tracks. I felt not that I was staring at a painting, but staring at a living, breathing human being that had all of the strength, courage, wonder, and passion I aspired toward. It changed my life.”

Salaz also admires the humble aspect of the work: “Joan of Arc is portrayed in a very simple pose, yet internally she’s having a deep moment of realization,” she said.

“Making paint feel like a living, breathing person is both difficult and wondrous. It requires something more than the technical aspect of painting.”

Salaz correlates the process to method acting, where an actor stays in character for the whole duration of a movie, both on and off camera.

“One should, as far as possible, visualize what is happening as if one were actually present at the events themselves, and try to work plots out using gestures,” she said. “As Aristotle mentioned in his ‘Poetics,’ to truly get into character or the story, artists need to find that character or that experience within themselves.”

What do I want to give to the world?
— Camie Salaz

“And it’s true, the more I am able to connect to the story or the character I’m painting, the more likely the painting is to evolve and grow through time.” Salaz explains. “I’ll make changes to paintings at the last minute and may even repaint huge sections, because the last piece of an idea has finally become clear. I’ve repainted areas as much as 20 times.”

Besides innate passion, life itself has Salaz thinking deeper about her artistic goal: “Momentous events like marriage and having a child, have marked the passage of time, reminding me that I am on my way out of this world; inspiring the question: what do I want to give back to the world?”

Salaz is aware of the subtle influence of information and what we absorb: “I absolutely believe that what we see and hear transforms us, but in what way? When I see a commercial on TV it transforms me, not profoundly, not deeply, and maybe not for the better. But great works of art can transform people in a deep way, and for the better. That would be my goal, to be able to transform the audience—gain, for the better, but maybe that goes without saying.”

Camie Salaz is represented in New York and San Francisco. Wim Van Aalst is a painter based in Belgium.