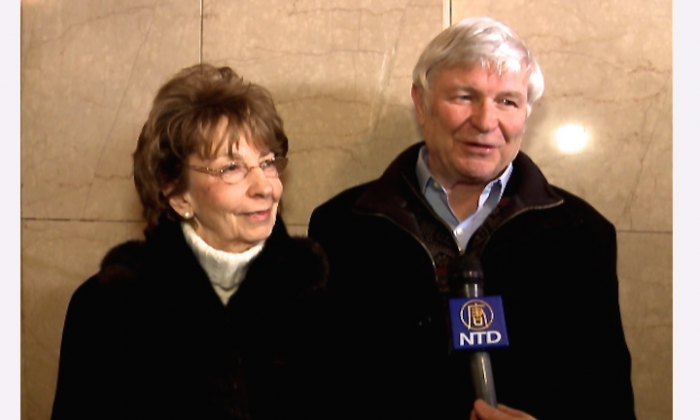 “For me, it was a very unique experience. I have never seen traditional Chinese dance, so it was really an interesting cultural experience for me. I feel like I’ve been away, I’ve traveled,” said Martha Brill, a painter.

Mr. Brill also liked it: “I just agree with her. Everything’s great.”

“It was really interesting, the visual effects, the figures going in and out of the background, it was wonderful,” said Mrs. Brill, who said Shen Yun was so inspiring it will influence her in her future work.

“It was wonderful, we are glad we came, it was beautiful. Beautiful costumes and beautiful people, they did a wonderful job,” said Marie Gagnon, a Bostonian who manages real estate.

It combines graceful moves with more dramatic leaps and tumbling techniques. “It is able to transcend ethnic, cultural, and even linguistic barriers, taking this well-established Chinese culture and presenting its essence to the world,” according to the Shen Yun website.

Both of them also enjoyed the fusion of Western and Eastern music provided by Shen Yun’s live orchestra.

“Some of the instruments we are familiar with and others we have never heard before, they are very nice,” said Mr. Moulison.

The performance also featured the two-stringed Chinese instrument, the erhu. “Surprising, with just two strings they get so much music out of that one instrument,” said Mr. Moulison.

Both of them liked the performance so much, they wholeheartedly recommend it. “We are going to try to get some of our friends to come next time,” said Mr. Moulison.