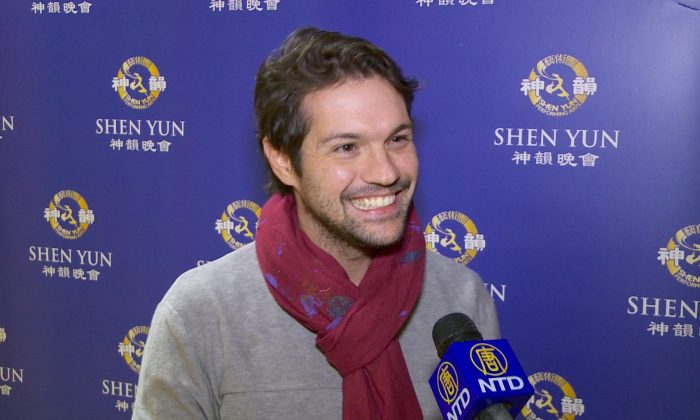 “I just keep thinking every time that one of the dancers is moving around: Wow, that’s a different possibility. That’s a new direction I can use in my canvas,” Mr. Djuro-Goiricelaya said.

A native of Venezuela, Mr. Djuro-Goiricelaya had finished his university studies in art with a study of the importance of color and had been invited back to teach a course on light and color. He went on to create curriculum for a MoMa project, made a foray into high-end fashion, and eventually found his way to New York after his family sought political asylum in 2004.

Mr. Djuro-Goiricelaya’s portfolio is filled with works of color and dreams, and the artistry of Shen Yun deeply resonated with him.

“It’s fantastic. I think that’s  quite inspiring. I love all the movements, color, all the colors of the outfits, the synchronism. It’s impressive. It’s quite, quite something,” Mr. Djuro-Goiricelaya said.

“[It] was delightful to see all the movements of the fabrics. And also those beautiful tonalities of greens and pinks were just delicious.”

He pointed to one piece that particularly exemplified the connection.

In “The Fable of the Magic Brush,” a young painter in a seaside village saves a maiden, who in turn gifts him a magical brush.

“I can relate a lot to the idea of wanting to really bring life to all the things that you paint,” Mr. Djuro-Goiricelaya said.

Much of Mr. Djuro-Goiricelaya’s work is drawn from the movement and energy of places, and those of Shen Yun’s are unique.

As such, classical Chinese dance is deeply expressive and lends itself to vast creative potential, the website explains.