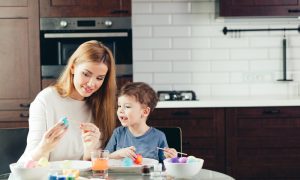 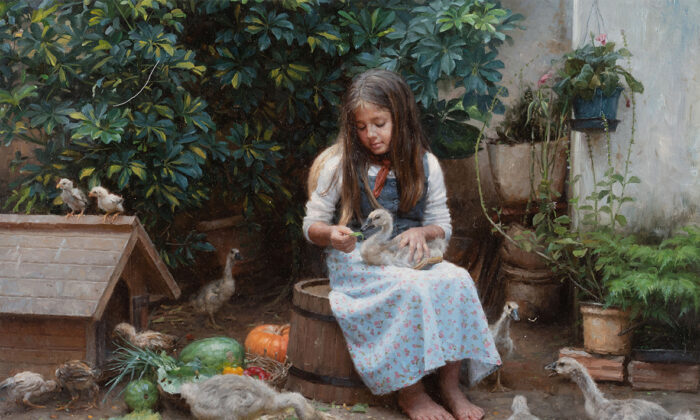 Painting from life requires an intensity of focus, a practiced way of seeing, and—if you’re working with chickens and children—a lot of patience.

“It took me about 150 hours to make this piece,” said Clodoaldo Martins. “To make this kind of painting, you don’t have the control. More so if you work with children, because they can’t keep calm, and you lose a lot of expressions.”

“I worked with a lot of difficulty,” Martins said of his oil painting “Milena’s Poultry.” He had to quickly take into account the many movements of the birds and the young girl. Yes, it would have been easier to work in a studio with a model, or even from a photograph, but it would not have been the same.

“Milena’s Poultry” will be on display at the Salmagundi Club in New York City from Nov. 24–30, as Martins is one of the finalists in the 5th NTD International Figure Painting Competition.

“The history of this painting is related to where I grew up, my past, my adolescence,” the Brazilian painter said. One day, he visited his mother-in-law and saw in the backyard a simple and small corner with lovely light, and it reminded him of a painting he had seen before. He made some sketches to save the moment, and when he saw it again with the birds and an 11-year-old girl, it caught his attention.

Martins works with a traditional style with oils, and relies completely on his imagination. There is no formula, he says, it’s just original.

The painting he submitted to the competition actually surprised him. Martins said he normally uses colder light, and the paintings are a bit dark and dramatic.

“But I was surprised by the soft light that I placed, which ends up showing more details. You see more clearly the objects; there are no dark areas,” Martins said. Perhaps it was his fondness for the subjects, he mused, that led him to place them in a better light.

“I was thinking of repeating this type of theme that I used in this painting,” Martins said.

The theme of the NTD International Figure Painting Competition is unique in its requirements. According to its website, “This competition calls for works of figure painting created around a central theme: pure truth, pure kindness, and pure beauty. Contestants must present authentic academic realism painting techniques through works of human figure oil paintings. Submissions must convey positive ideals such as righteousness, compassion, and beauty, and harness the power of traditional values.”

Martins had heard of the competition through friends in previous rounds, but this is his first time participating.

“I saw that the mission of NTD is to promote traditional art, which I think is very good, it is great that they can, through a competition, be able to promote traditional art,” he said. “I am very anxious for the results, I know it is not easy, the level of the event is very high. Just participating, and I’m very happy. Sincerely, since I signed up, I already felt fulfilled.”

“I’ve participated in different competitions in Sao Paulo, quite high level, but nothing like NTD, where there are so many very good competitors from around the world,” he said.

It is Martins’s dream to make a living from his art, which though difficult for an artist is doubly so for a traditional artist, and as such modern art can seem like a more attractive field. But this realistic style is what drew Martins to art in the first place.

“When I was 9 years old, at that time I was in school and I spent many more hours drawing than doing homework,” Martins said. He copied a lot of things he saw, strange things especially. He kept drawing, and friends and family encouraged him to pursue art, but he didn’t know if it was possible. Painting, especially, seemed such a lofty goal.

“At that time, I saw the paintings as something very high for me. I only thought that great people come to do such admirable work—for me, that was something of the great masters of the Renaissance period,” Martins said.

He entered an art school, starting in design before working on the canvas, but over time, he realized he only wanted to paint.

“After that time I was able to start exhibiting my works and paintings over time, and I improved my technique, and my pieces were better and better,” he said.