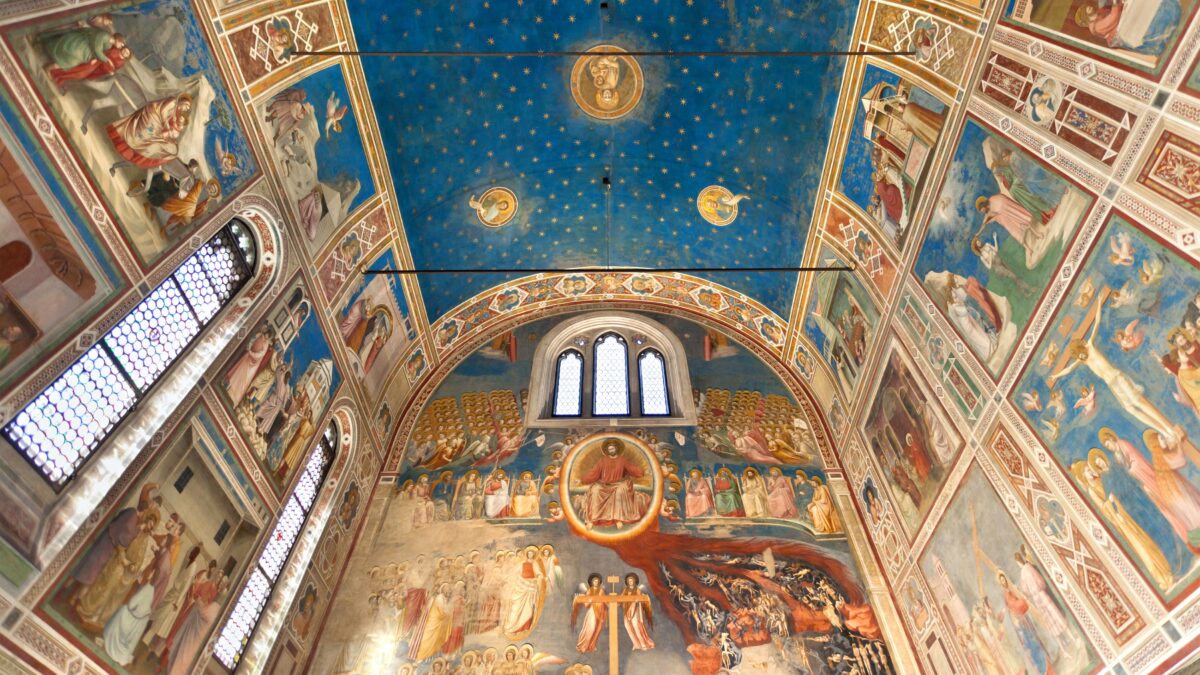 Nicknamed “the Brain of Veneto,” Padua is home to the prestigious university (founded in 1222) that hosted Galileo, Copernicus, Dante, and Petrarch. Pilgrims know this city for the Basilica of St. Anthony, where the faithful assemble to touch his tomb and marvel at his holy relics. It’s a great place to experience Italy: to make some new friends, get chummy with the winds of its past, and connect with the delights of its now.

I start my visit with a ramble around the old town center. It’s a colonnaded, time-travel experience through some of Italy’s most inviting squares, perfect for lingering over an aperitivo. But it’s not stodgy — this university town has 60,000 students and a youthful spirit. No wonder Galileo called his 18 years on the faculty in Padua the best of his life. I see young people — apparently without a lot of private space in their apartments — hanging out, kissing, and cuddling in public. Students are making themselves at home with their heritage, lounging literally under a medieval tomb that stands atop ornate columns.

Since the students can graduate whenever they defend their thesis, little graduation parties erupt on the streets throughout the year. Graduates are given a green laurel wreath. Then formal group photos are taken. It’s a sweet, multigenerational scene with familial love and pride busting out all over.

Then, once grandma goes home, the craziness takes over. Sober, scholarly clothing is replaced by raunchy wear as gangs of friends gather around the new grad in front of the university, and the roast begins. A giant butcher-paper poster with a caricature of the student — generally obscene — and a litany of “This Is Your Life” photos is presented to the new graduate. The happy grad reads the funny text out loud while various embarrassing pranks are pulled. The poster is then taped to the university wall for 24 hours for all to see.

Eventually I tear myself away from this profane ritual to seek out Padua’s sacred sights: the Basilica of St. Anthony and the Scrovegni Chapel. Buried in the basilica is Friar Anthony of Padua, patron saint of travelers, amputees, donkeys, pregnant women, barren women, flight attendants, and pig farmers. Construction of this impressive Romanesque/Gothic church, with its Byzantine-style domes, started immediately after Anthony’s death in 1231. As a mark of his universal appeal and importance in the medieval Church, he was sainted within a year of his death. And for nearly 800 years, his remains and this glorious church have attracted a steady stream of pilgrims.

Going with the flow of the pilgrim groups, I enter the church. Gazing through the incense haze, I see Donatello’s glorious crucifix rising from the altar, a masterpiece appropriate for one of the most important pilgrimage sites in Christendom. Following the pilgrims into the Chapel of the Reliquaries, I stand before the basilica’s most prized relic: Anthony’s tongue. When the saint’s remains were exhumed 32 years after his death, his body had decayed to dust, but his tongue was found miraculously unspoiled, still red in color. How appropriate for the great preacher who, so full of the Spirit, couldn’t stop talking about God.

My next stop is across town at the glorious Scrovegni Chapel. It’s wallpapered with Giotto’s beautiful cycle of nearly 40 frescoes depicting the lives of Jesus and Mary. Painted by Giotto and his assistants from 1303 to 1305, it’s considered to be the first piece of “modern” (as opposed to medieval) art. This work makes it clear: Europe was breaking out of the Middle Ages and heading into the Renaissance. Giotto placed real people in real scenes, expressing real human emotions. These frescoes were radical not only for their three-dimensional effects, lively colors, and light sources, but also for their humanism.

In the early evening, after the museums and churches have closed, Padua’s squares become open-air student parties, dotted with drinks of rosy spritzes that glow with the light of the setting sun. I cap my day by joining the festivities. Reminding myself that I’m as interesting to these young Italians as they are to me, I befriend a table of college students and buy a round of drinks. Diving headlong into a vigorous political discussion, I partake in the Italian ritual of the bread and oil. I pour some fine olive oil on a dish, season it with salt and pepper, rip a long strip from our bread, dip it, and bite. A student, nodding with approval, explains that I am making the scarpette: “the little shoes.”

Soaking up the oil along with the conversation, I’m still thinking about my day, witnessing the sacred and the profane here in Padua. I realize that travelers can become human scarpette — sopping up culture — wherever we venture.