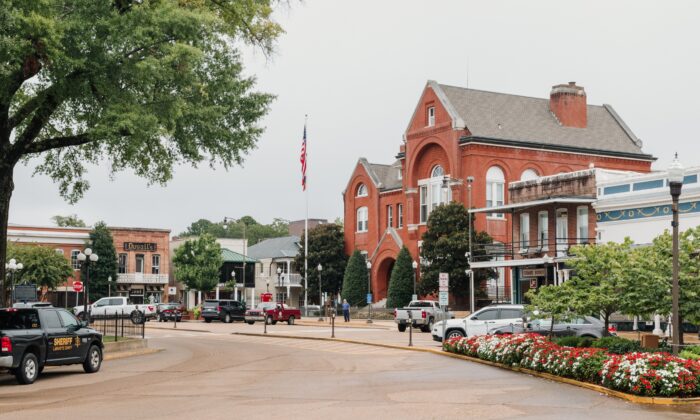 Oxford, Mississippi, is one of those college towns, fairly or not, overshadowed by campus.

The University of Mississippi, the state’s flagship college and called “Ole Miss” by just about everyone, will always be the big draw. Especially on Saturdays during the college football season, when alumni and fans descend upon the city. To put it in perspective, the official capacity of Vaught–Hemingway Stadium (64,038) is more than double Oxford’s year-round population (29,996) as recorded in the 2020 Census.

But beyond campus and the hallowed ground of the football field—college football is, after all, the all-but-established state religion of the South—is a town that punches well above its weight.

No place is that more evident than downtown with its landmark square.

As the seat of surrounding Lafayette County—named after the Marquis de Lafayette, the celebrated Frenchman who fought for the cause of liberty and independence during the American Revolution and later became a hero of republican France—Oxford is home to a National Register of Historic Places-listed county courthouse.

The stately postbellum edifice, a replacement for an earlier courthouse burned in 1864 by Union troops during the Civil War, sits at the center of the square. Fittingly, the south front features a rather simple monument to the soldiers of the Confederacy that in recent years has become the subject of protests and attacks from iconoclasts who seek to revise history in keeping with the “wokist” narrative. Somewhat interestingly, nearby streets are named after several past presidents, including Ulysses S. Grant and Abraham Lincoln.

On all four sides of the square are numerous storefronts, some dating back more than a century. Most feature wrought-iron balconies on the second story similar to what you see in New Orleans. The entire streetscape is tidy with an almost “Leave it to Beaver” or “Mayberry” wholesomeness to it, college nightlife notwithstanding.

Unlike the main streets in many other towns of similar size, Oxford’s storefronts are mostly full and alive with activity. Not only are there quaint shops, including the family-owned Neilson’s Department Store and several other boutiques, but the downtown features a vibrant culinary scene.

City Grocery is the scene’s leader, having first opened its doors in 1992.

While owner-chef John Currence has since opened other notable restaurants, the original remains the best. Not least because of its atmosphere.

Housed within a Reconstruction-era brick livery stable, the interior feels more like an art deco Parisian bistro than a restaurant in Mississippi’s ninth-largest city. The white-tablecloth eatery not only features elegant banquette seating on the sides of the exposed brick walls, but a wine list that more than holds its own against big-city competition. Most impressively is the large selection of wines by the glass.

Saint Leo, another popular restaurant, is run by James Beard-award semifinalist Emily Blount. Despite the simple-meets-elegant Italian menu, the atmosphere feels somewhat confused. Is it a bar, casual trattoria, or a more upscale, sit-down restaurant? That question was something this columnist kept asking himself over dinner, which included a remarkable and incredibly underpriced $100 bottle of vintage 2008 blanc de blanc brut from Saint-Chamant.

For dinner, eat at City Grocery (CityGroceryOnline.com/city-grocery/), McEwen’s (McEwensOxford.com), Julep Steakhouse and Flights (JulepSteakhouse.com/), or Saint Leo (EatSaintLeo.com/). Be advised that some restaurants may be closed Mondays and Tuesdays. Reservations are generally recommended. Big Bad Breakfast (BigBadBreakfast.com/) is highly recommended for breakfast.

Stay at the Courtyard by Marriott (Marriott.com) for a typical chain hotel experience. It is located within walking distance of pretty much everything to do and see in Oxford.

Alternatively, consider booking a room at the Graduate (GraduateHotels.com/oxford). The Oxford outpost, as with its counterparts in other college towns across the country, has a boutique feel. The only issue may be the incredibly limited food and beverage offerings.

No visit to Oxford is complete without a visit to Rowan Oak (RowanOak.com), where acclaimed writer William Faulkner lived.

The closest major airport, Memphis International Airport, is a little more than an hour’s drive away. For those driving, Oxford is about halfway between New Orleans and St. Louis.

The author was partially hosted by Visit Oxford.