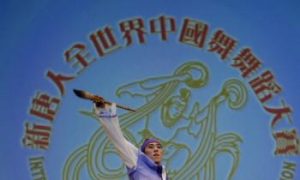 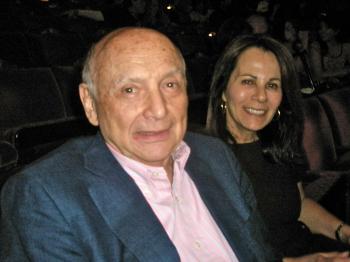 “It’s so beautiful, and amazing athletes. I am very lucky to see it,” Mr. Fulton said.

As chairman and founder in 1956 of Fulton Umbrellas, which today boasts a large company operation in China, Mr. Fulton was familiar with Chinese culture.

“I have been going to China for 30 years,” he said. “First, Taiwan and then Hong Kong and China, so I am familiar with the culture, the food which I love, and in fact with the customs—and this is very well interpreted in a very entertaining way. Very impressive.”

Mr. Fulton, accompanied by Austrian-born Heide Nurdron, a mother of four now living in London, said the show was “excellent, particularly the dancing—and the staging is good as well,” she added.

He agreed with his companion that the historical aspect of Shen Yun was interesting.

Ms. Nurdron had also been to China on business and one day would like to go there as a tourist as she is always very busy, she said.

She found Shen Yun Orchestra’s masterful fusion of ancient Eastern and classical Western music “lovely. It’s very pretty and very melodious. It’s beautiful because I did not expect anything … I have never seen it before so I didn’t know what to expect, but I love it.”

One dance in particular, Our Story, surprised her.

The dance tells the true account of a teacher, a practitioner of Falun Gong, an ancient meditation system banned over a decade ago in China, whose adherents are still persecuted today. The teacher, guiding her pupils not just in the art of writing, but life, was arrested and killed for writing on a blackboard for her students, ‘truthfulness, compassion, tolerance,’ in Chinese characters, hallmarks of her belief.

“That was really interesting,” Ms. Nurdron said. “I didn’t know about that even today.”

Mr. Fulton said he would recommend the show to his friends, and rated Shen Yun 10 out of 10.

“I must admit I am biased because I love China and I love Chinese culture, and if I were very objective, [I would say] it will appeal to Chinese and to people who are familiar with China.”