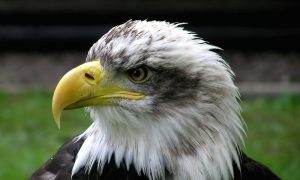 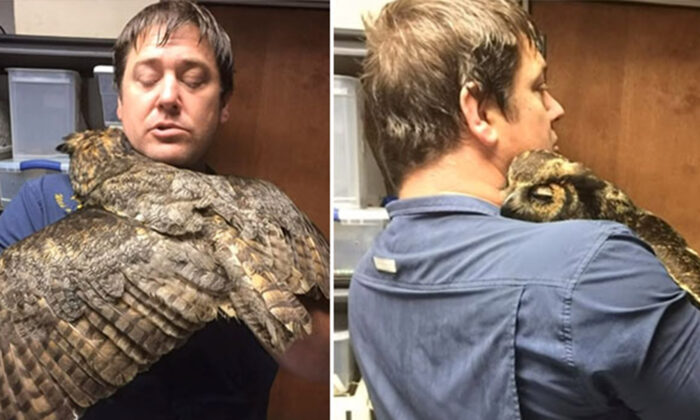 This is the story of GiGi, a severely injured great horned owl that was nursed back to health by a man who loves owls, the “birds of prey whisperer.” Their loving bond is remarkable!

Great horned owls are also known as tiger owls or winged tigers. With such an awesome name, it might seem these tigers of the air can look after themselves just fine. In this incident involving GiGi, however, we see that even great horned owls sometimes need a helping hand.

When GiGi was brought to Wild at Heart Rescue in Mississippi in May 2016 for treatment, she was in a very bad state. She suffered a severe concussion, most likely by having been hit by a car. Furthermore, GiGi was covered with parasites and had a pneumonia-like condition.

Critically ill, the great horned owl significantly lost weight during the course of treatment. “This bird was one of the most critical we have ever taken care of. The fact that this bird has lived is beyond comprehension,” Missy Dubuisson, founder and director of Wild at Heart, told The Dodo.

Under Douglas’s care, GiGi slowly made a recovery from death’s door. She went from being hand fed to grabbing food on her own, a clear indication of her feeling better.

One day, Douglas had to visit his family in Michigan, so GiGi was left without her rescuer. When he returned, the most beautiful thing happened.

Upon returning, Douglas gave GiGi an examination. He took the owl and said “shhhhh” like he normally does—it is very calming for birds. At that moment, GiGi stretched her wings out and gave Douglas the biggest owl hug she could.

As GiGi rested her head on Douglas’s shoulder, one could see an expression of gratitude and contentment on her face.

“They show their gratitude. Nothing these birds of prey do any more surprises me,” Wild at Heart Rescue wrote in a Facebook post, alongside photos showing this precious moment.

Douglas has worked with many birds at the rescue, “but the connection I have with them is nothing like this owl giving me a hug,” he told Today.

The “birds of prey whisperer” said to The Dodo: “For some reason when that bird was hugging me, all I could think of was my dad.”

Douglas recalled a time in his youth when his father told his family of a great horned owl that would often perch on top of the family barn. It seemed no one except his father saw it. However, on the morning of his father’s death, Douglas saw this owl overlooking the spot where his father had passed away before it flew off into the woods.

Seeing Douglas being affectionately embraced by GiGi the owl, Dubuisson said: “It literally brings tears to my eyes to watch him interact with these birds. They absolutely know him and trust him. It’s the trust that you see in her face.”

After GiGi was nursed back to health, she was released back into the wild. Before the magnificent bird flew back to the wild, she looked back, seemingly saying “Thank you.”

“When (GiGi) looked back, it definitely felt like gratitude to me,” Douglas said.

Douglas Pojeky has since moved back to his home state of Michigan. He is no longer with Wild at Heart Rescue.

Wild at Heart Rescue specializes in the rescue, rehabilitation, and release of injured, sick, or orphaned wildlife native to Mississippi. Click here to visit their Facebook page.